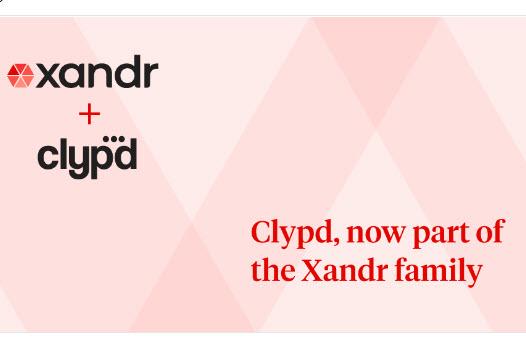 Competition within the addressable TV marketplace continues to heat up.

The news was first reported by Reuters, but was not officially confirmed by Xandr until this morning.

Clypd, launched in 2012 as a private company, secured $19.4 million in Series B funding in 2015, led by European broadcaster RTL. Following its agreement to integrate its research and analytics data products in to Clypd's platform, TiVo also participated in the Series B funding.

The cross-linear/OTT capabilities were achieved through RTL’s integration, in April, of its SpotX global video advertising platform with Clypd’s audience-based TV sales platform.

The AT&T acquisition (Reuters could not determine the terms of the sale) will add more linear TV ad inventory to Xandr Community through Clypd’s clients, and may also fill in gaps in ad-tech capabilities.

The combined media inventories within Xandr Community reached a total monthly audience of 150 million as of May 2019, according to AT&T. The addressable portion includes DirecTV’s 19 million satellite homes and 1.6 million DirecTV Now subscribers, as well as addressable inventory from Altice, Frontier and others.

Currently, the other leading contender to unify MVPDs’ inventory and harness addressable’s full potential reach is Ampersand (formerly NCC Media), a sales consortium among Comcast, Cox and Charter that is majority-owned by Comcast. About 45 million of the 85 million U.S. homes sold by Ampersand are addressable.

Other entities vying in the addressable sector include Project OAR, the consortium formed by major TV networks with Vizio, and Nielsen, through its acquisitions of several advanced-TV tech entities. Dish and Verizon sell their addressable inventories independently.

AT&T, under heat from activist investor Elliott Management, is pushing to expand its revenue channels as it resists Elliott’s call for AT&T to sell off DirecTV. DirecTV is a key part of AT&T management’s strategy of being able to offer advertising across digital, wireless, and satellite TV platforms.