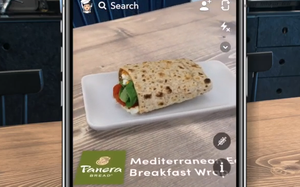 Panera Bread wants its customers to use their phones to check out the QSR’s food  — with a new mobile-only, augmented-reality advertising unit that doesn’t require an app download.

When visitors to sports-focused publisher Bleacher Report encounter the ad unit, they are encouraged to “Play with your food, open in AR below.”

By activating their camera or clicking on a link to Facebook, Instagram or Snapchat, users can manipulate a Mediterranean Egg White Breakfast Wrap and see its ingredients and their nutritional value.

“There’s not a lot of ad units out there that are AR-powered. We give the user their choice as to how they want to view it,” Panera vice president of marketing Scott Nelson tells Marketing Daily.

The initiative is an outgrowth of Panera’s first dabble with AR earlier this year in conjunction with South by Southwest in Austin, Texas. The company launched four Snapchat AR lenses there that let users create “hacks” of Panera’s soup offerings, visually adding other menu items to create their own variations. (One person added chips and macaroni.)

“That was our first foray into testing and learning around user engagement,” Nelson says.

Panera hopes to gain a variety of user insights from the new AR ad unit by starting with a single menu item. “We’re going to be building this out for a large variety of our menu. We see a lot of different options and evolutions. It’s not a ‘sales driver’ right now, it’s more about engagement and interactivity,” Nelson says.

In announcing the ad unit, Panera cites data from Comscore showing that the average person downloads a great total of zero apps per month.

“That’s the beauty of this thing,” Nelson says. “There’s no friction or too much energy required by our customers. It just opens up a very entertaining experience with one click.”

Panera’s AR agency, QReal, developed the creative assets for the campaign. The AR unit will run using Composite, a mobile ad platform created by the innovation lab of the GLOW agency.

“We think there is huge upside for brands willing to challenge the status quo with display advertising,” says Mike Molnar, managing partner at GLOW. “That’s what inspired us to create an ad platform that brings the best of social sharing and AR creativity to traditional banner ads.”

Mike Cadoux, general manager at QReal, says the agency shares Panera’s belief that AR can bring a new level of transparency to customers.

“Ad units that bring this level of interaction and immersion are certainly the future,” he says.