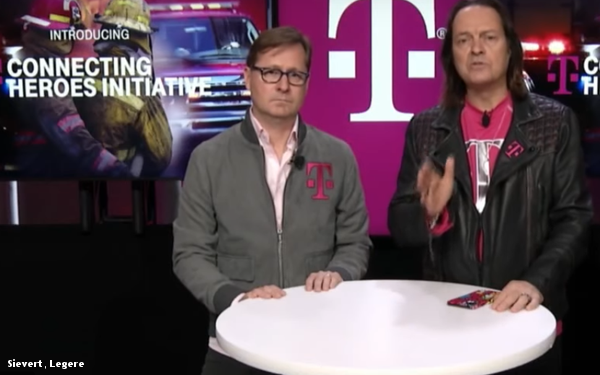 There was one major asterisk: The deal is contingent on the T-Mobile/Sprint merger actually happening.

"Everything we announced today is dependent on the massive capacity expansion that comes from the new T-Mobile," Mike Sievert, T-Mobile's COO, made clear.

On Thursday, AT&T blasted T-Mobile. A spokesman huffed, that unlike T-Mobile, "We have a deep and genuine commitment to connecting first responders and using technology to enrich education, not marketing stunts contingent on getting something approved. If they [T-Mobile] believe it's critical to offer free access to these communities they would do it today, no conditions or questions asked."

AT&T poured the gas on T-Mobile now possibly in part because T-Mobile’s voluble CEO John Legere, has hammered his rivals in the past with language and tactics that seem rude, even in a cutthroat business. (Some specifics detailed later.)

The new T-Mobile offer would provide 10 years of free service to responders. “Completely free service for all of the nation’s first responders. This is unprecedented,” Sievert said, explaining its “Connecting Heroes” plan in a video.

Second, it announced “Project 10 Million,” pledging to provide free internet to 10 million homes with children to aid them in their homework.Third is “T-Mobile Connects,” which will provide  5G phone service for $15 -- half price -- to poorer households, for at least five years.

Though the Federal Communications Commission has now approved the T-Mobile/Sprint deal, 16 states are suing to stop it, claiming the further consolidation of wireless industry competitors will cost consumers money.

T-Mobile’s first responder offer might call to mind especially indelible memories in California and New York, two of the states that are part of the lawsuit.  New Yorkers will never forget 9/11, and Californians seem to be experiencing devastating wildfires at a rapidly accelerating rate.

It’s unlikely that Verizon, the nation’s largest wireless carrier, will sling any mud. That’s because Verizon caught hell in August 2018 when it throttled the Santa Clara Fire Department’s data speeds in the midst of the Mendocino wildfire that scorched 400,000 acres, the largest wildfire in California history. Raked over the coals, it then pledged that this kind of move “would never happen again.”

Since then, Verizon’s come up with new deals for fire and police departments as well as individual first responders. AT&T’sFirstNet already gives first responders priority access to its 4G LTE network and other extensive features.

And back to the way T-Mobile's attacked its competitors: For April Fool’s Day, T-Mobile unveiled a video hyping the T-Mobile Phone BoothE, a vertical cardboard box that it said could be used to block out street noise but otherwise was just a phone booth.

That was a slap at AT&T, which had been promoting its 5G-E service, which was actually little more than 4G LTE with an E added, but seemed design to fool consumers into thinking it was the new advanced 5G service.

In September, unimpressed with Verizon’s 5G launch in New York that didn’t disclose the service only reached a fraction of the market, T-Mobile put up billboards and banners renaming the company VerHIDEzon.