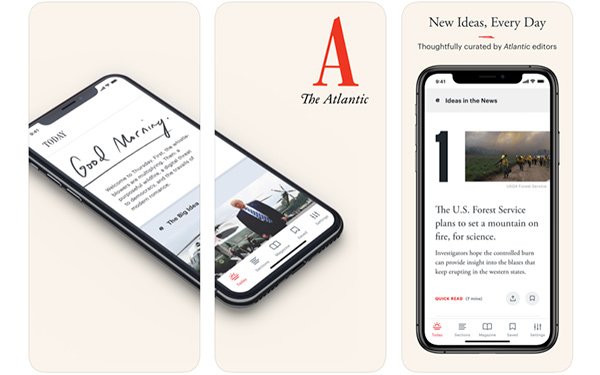 The  Atlantic unveiled a redesign today, the most dramatic in its 162-year history, along with a new iOS app.

The North Face is the exclusive launch sponsor of both the redesign and the app.

Most notable within the redesign, readers will find a reimagined logo, a simple “A” in a commissioned typeface called Atlantic Condensed, inspired by the type used by the title’s founders.

The redesign begins with the December 2019 issue, themed “How to Stop a Civil War.” It presents a clean look that puts the text front and center. The redesign team, led by creative director Peter Mendelsund and senior art director Oliver Munday, discarded many of the graphics and images frequently used within the magazine’s pages and replaced them with original photography and illustration.

“The design is bold but classical, beautiful but spare, and respectful of the reader most of all. We’ve rethought everything about the way we present the Atlantic to the world, helping readers better understand our words through clarity in design,” said editor in chief Jeffrey Goldberg.

Both the magazine and app come just two months after the Atlantic launched a digital subscription service, which drew record numbers of subscribers in September and October and doubled the number of subscriptions and revenue expected.

The new iOS app offers user experiences for both subscribers and nonsubscribers in a curated environment that tailors news and ideas to the reader with personal touches, such as handwritten greetings based on the time of day.

Users can access the “Today” tab, which is positioned to read like a hybrid of a newsletter, homepage and magazine, without a subscription. The tab is designed to provide an introduction to the best of The Atlantic’s content.

Other elements of the new app include ad-free articles also available in Dark Mode, the ability to save articles and download archived issues for offline reading and access to The Atlantic’s crossword, which can be solved in the app.