'Ray Donovan' Shows No Sign Of Weakening In Season Seven 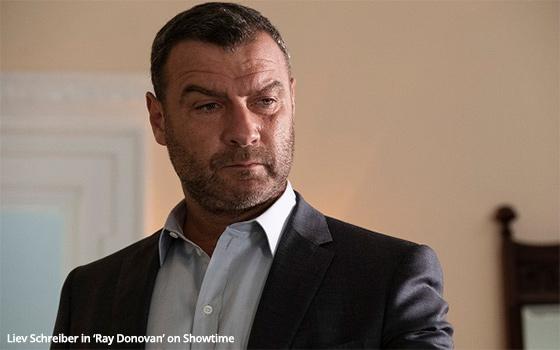 Ray Donovan has long been one of TV’s most notable anti-heroes, a character descended in many ways from the original gangster anti-hero of TV’s most recent Golden Age, Tony Soprano.

And now, like Tony, Ray is in therapy. The new seventh season of “Ray Donovan” opened this past Sunday on Showtime with Ray (Liev Schreiber, photo above) sitting down with a therapist -- played by none other than Alan Alda -- to discuss his family issues.

And as anyone well knows who has watched “Ray Donovan” over the years, Ray's “family issues” are tangled indeed. If Ray is planning to unravel the whole mess in therapy, then this therapist is in for a fee windfall of unimaginable dimensions.

In the season premiere seen this past weekend, Ray seemed intermittently to be responding to therapy. In one scene, after chasing a young man down a flight of steps in the Metropolitan Opera House at Lincoln Center, Ray warned him to stop stalking Ray’s client, a ballerina. Ray then punched him hard in the face for good measure.

But moments later, Ray returned to kindly advise the man that he should consider getting help -- such as therapy -- for his stalking compulsion.

The episode even had Ray trying to make amends with his father, the career criminal Mickey Donovan (played by Jon Voight in what may be TV's best performance of the entire decade of the 2010s). Things did not work out in quite the way that Ray envisioned this amends-making, but at least he tried.

“Ray Donovan” has been around since 2013, which in this day and age feels like a long time. We who have followed the tribulations of Ray and his family -- his father, brothers, two children and his late wife Abby -- have been through a lot with him.

When the show began, he was a “fixer” for Hollywood bigwigs in trouble, and last season and in the current one, Ray is working his “fixing” magic in New York for, among others, the mayor.

Through it all, Ray has committed a number of murders and been badly beaten multiple times in the process. But like a Timex wristwatch, he takes a licking and keeps on ticking.

You might say the same thing about “Ray Donovan” the show too. Here at the start of its seventh season, the series shows no signs of slowing down or otherwise weakening. On the contrary, this past weekend's episode showed an aging series still at the top of its game, and in some ways better than ever.