It Seems 'Bear'-ly Possible, But Here Comes 'Man Vs. Bear' 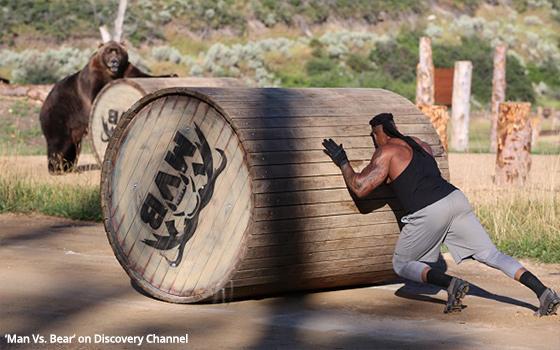 The impetus for taking up this subject today: A new unscripted series coming to the Discovery Channel Dec. 4, in which three bears will compete with (possibly) three humans in various feats of strength. This show is called “Man Vs. Bear.”

On this subject, the TV Blog has mentioned the following phenomenon from time to time: Over the years, “The Simpsons” has featured scenes in which Homer and other members of his family are seen watching made-up shows on TV.

Often, these have been fanciful reality shows whose concepts were wholly invented by the “Simpsons” writers, or based purposely on existing reality shows in order to spoof them.

The latter category has included titles such as “No Pants Island” and “Promiscuous Idiots Island” -- both parodies of “Temptation Island” and similar shows.

Others were such far-out concepts that they may have seemed impossible to replicate in real life. But at the same time, while watching these fictional shows, I used to wonder when or if TV would get around to actually making them real.

For example, one was called “When Surgery Goes Wrong,” which is not too far removed from a show that eventually came to be made, the plastic surgery reality show called “Botched,” airing on E!.

Others that seemed wholly possible -- or at least not far from the reality of reality TV -- were “When Buildings Collapse” and “When Animals Attack Magicians.” You could see either of these getting made.

There was even a “Simpsons” title called “Tied to a Bear,” which brings this TV Blog full circle back to the subject at hand -- this “Man Vs. Bear” show, which Discovery has begun promoting lately on air.

The headline on Discovery's press release ballyhoos the show as a “Series Like Never Seen Before,” but that is not quite accurate.

In “Man Vs. Bear,” some very strong humans (possibly two men and one woman, although this was not specified in Discovery’s press materials) will face off against three Grizzly bears named Bart, Tank and Honey Bump (the only female of the three).

These three bears reside at a sanctuary in Utah. Please, no jokes or snide remarks about the temperature of their porridge.

Rolling giant barrels (photo above -- bear, left) is apparently one of the competitions that we will see in this series. One troubling aspect of the show: For the bears, there seems to be no incentive or motivation to win, such as a prize.

Instead, the human competitors are vying to score the highest point totals that would earn them the title of champion in this bears vs. humans competition -- possibly even if they lose every event against the bears, one of which is 8’6” and weighs 1,400 pounds.

If memory serves, “Man Vs. Beast” was met with protests over its possible mistreatment of the animals that were participating, although it was some of the human combatants who potentially came in for worse.

Who can forget the spectacle from that show of 44 dwarfs tethered to a DC-10 on an airfield runway competing with an Asian elephant to see which could pull this jetliner the farthest in the least amount of time?

Yes, this actually happened. In fact, that was the era in the evolution of reality TV, in which anything seemed possible, that these fictional “Simpsons” shows were capturing with their satires of them.

And here we are in 2019 with “Man Vs. Bear” -- a show that is not a satire, but a real reality series that bears out another axiom in the TV business today: Anything is possible.