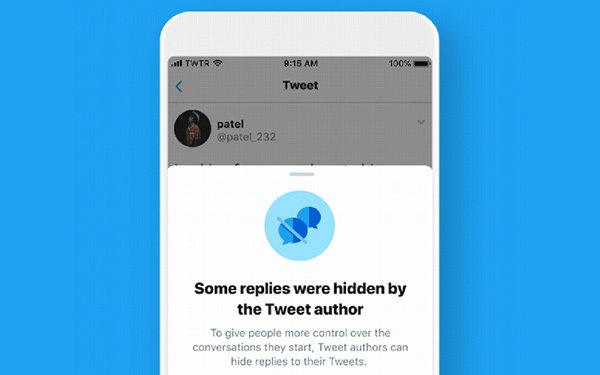 Giving users more control over their tweets and the discussions they spark, Twitter is making its “Hide Replies” feature available to all of its users around the world.

No minor tweak, the change fundamentally changes how conversations transpire on the platform, according to Suzanne Xie, director of product at Twitter.

Without the “Hide Replies” feature, “Repliers can shift the topic or tone of a discussion and derail what [a tweeter and her or his] audience want to talk about,” Xie admitted on Thursday.

After testing the feature among a subset of Twitter’s user base, Xie and her team determined it’s an effective way for users to manage the conversations they start.

From this point forward, any user can choose to hide replies to her or his Tweets.

However, other users will still be able to see and engage with hidden replies by tapping the grey icon that will appear alongside tweets.

“This way, you have more control over the conversations you start, but people can still see the entire conversation,” according to Xie.

While testing the new feature, Twitter also learned users are most prone to hide replies they think are irrelevant, off-topic or annoying. Only 15% of users are employing the feature as a means of blocking or muting other users.

Despite that low percentage, Twitter still plans to ask users if they want to block particular users after employing the “Hide Replies” feature.

Also of note, public figures don’t appear to be making much use of the new feature, but that could change over time.
social media, twitter
Next story loading