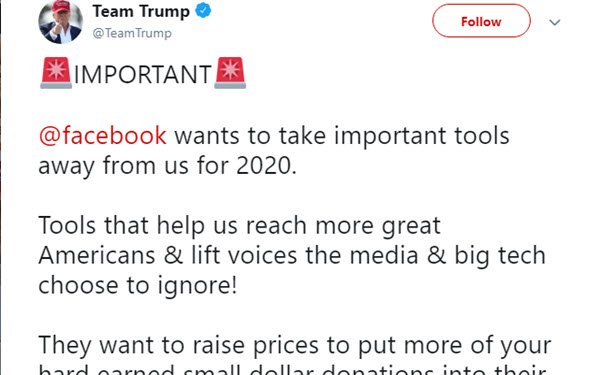 With Google now saying it will limit election-ad audience targeting to broad categories on YouTube and its other platforms, as well as in buying political ads through its ad-buying software — and Twitter commencing its global political ad ban as of today — Facebook is reportedly now considering an adjustment in its targeting policy.

Facebook is discussing upping the minimum number of people who can be targeted by political ads from 100 to “a few thousand,” although no decision has been made, according to The Wall Street Journal.

Yesterday, a Facebook spokesman reiterated to WSJ the company’s previous statement (originally made by CEO Mark Zuckerberg in pitching Facebook’s proposed cryptocurrency to Congress) that it is looking at “various ways” it might refine its approach to political ads.

However, Facebook now faces intense pressure from the Trump campaign, in particular, not to limit its targeting tools.

On Wednesday, The Washington Post reported on the Trump campaign somehow anticipating possible changes in Facebook’s political ad policies with an Twitter account tweet: “@facebook wants to take important tools away from us for 2020. Tools that help us reach more great Americans & lift voices the media & big tech choose to ignore! They want to raise prices to put more of your hard earned small dollar donations into their pockets.”

The Post also noted that Trump campaign director and social media strategist Brad Parscale has said that the campaign team “has tested thousands of variations of political ads in an attempt to reach small groups of voters, such as ’15 people in the Florida Panhandle that I would never buy a TV commercial for.’”

In response to Google’s decision, also on Wednesday, Parscale charged in a tweet that “Political elites & Big Tech want to rig elections,” asserting that this will hurt Democratic candidates as well as Trump and other Republican candidates.

The campaign for the Democratic presidential nomination of former Vice President Joe Biden has complained to both Google and Facebook about their running of false ads about Biden, and “has been in touch with Facebook, Google and Twitter about its concerns over their political ad policies,” according to letters reviewed by WSJ.

Facebook has asserted that its recent decision to stop attempting to fact-check political ads is based on First Amendment issues. But some have accused the platform of caving to Republican pressure on that and other fronts.

Presidential candidate Sen. Elizabeth Warren (D., Mass.), who has called for the breakup of Facebook and other big-tech companies, yesterday excoriated Zuckerberg with a tweet about NBC News revealing his previously undisclosed September White House dinner meeting with Trump and Facebook board member/Trump donor Peter Thiel.

“Amid antitrust scrutiny, Facebook is going on a charm offensive with Republican lawmakers. And now, Mark Zuckerberg and one of Facebook's board members — a major Trump donor — had a secret dinner with Trump. This is corruption, plain and simple,” Warren tweeted.

In October, the media reported on a leaked tape in which Zuckerberg said a Warren administration would pose an “existential” threat to Facebook.