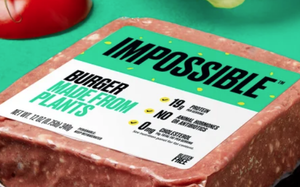 As the financial, political and public relations competition between animal meat and plant-based meat substitutes heats up, new research suggests that price and taste are two main drivers of plant-based product consumption.

The same research shows that the #1 reason that people said they tried plant-based meat products was curiosity about taste — not principle-based motives such as environmental concern, health or animal welfare. However, principles rose to the top among repeat purchasers/loyal users.

UBS Evidence Lab surveyed some 3,000 consumers and found that at 8%, trial consumption of plant-based burgers in the United States lags behind that of Germany and the U.K., both in the mid-20% range.

Beyond taste, top purchase considerations for plant-based meat products were health perceptions (#2), animal welfare (#3) and the quality of being resource-friendly (#4). But among survey respondents who planned to increase their consumption over the next six months, health perceptions was the #1 reason.

According to the U.S. Department of Agriculture, Americans’ per-capita consumption of red meat and poultry rose to 220 pounds in 2018, from 167 pounds in 1960. An co-dependent system consisting of farms, feed lots and slaughterhouses delivers tens of millions of cows and pigs each year to consumers via grocers and restaurants.

Having seen the impact of plant-based alternatives on the milk industry, this ecosystem is fighting back, as chronicled last week by the Wall Street Journal. Beef producers are leveraging food scientists, lobbyists and even voice activation on Google and Amazon devices when people have questions about meat. One example: “The best alternative to beef is more beef.”

And plant-based meat providers are looking beyond the 6% of Americans who are vegan to attract so-called “flexitarian” eaters who might be environmentally friendly enough to give their burgers or nuggets a try. Some early entrants like Impossible Foods started with distribution exclusively via quick-serve restaurants, where plant-based meat is priced at a smaller premium than in the retail channel, according to UBS.

Meanwhile, Beyond Meat chose retail over QSR before it began supplying Dunkin’ Donuts with a plant-based breakfast sausage this year. Retail plant-based meat offerings carry a significant price premium, according to UBS, with the average retail selling price for an eight-ounce Beyond Meat burger patty pegged at $5.58—nearly 2.5 times that of a comparable Tyson animal beef patty.

Cost is still a major stumbling block for companies pursuing the production of lab-grown meats using animal cells. UBS says that the first lab-grown meat from Memphis Meats cost $18,000 per pound, but by January of 2018 that had been reduced to $2,400.

Research from CB Insights describes such “high-tech” meats as being priced “as luxury goods,” with a major cost factor being the presence of fetal bovine serum, which is extracted from cow fetuses.

“However, startups are looking to eliminate FBS from the meatless equation in order to cut costs,” CB notes.