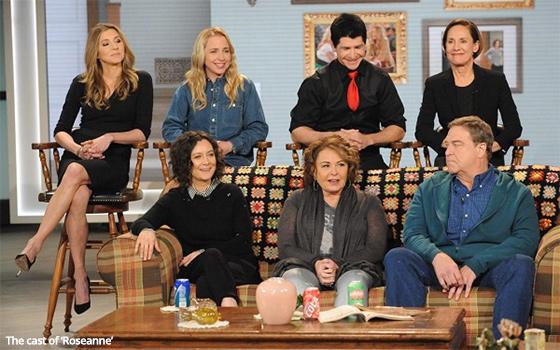 Less than two years ago, everyone who was doing any business with Roseanne Barr dropped her like a hot potato and fled for the hills.

Most notable among all the fallout following her tweet that ended the newly revived and high-rated “Roseanne” in May 2018 after less than two months on the air was the mass dropping of the old “Roseanne” from myriad platforms.

Among the entities that flew into high dudgeon over Roseanne's tweet about former Obama aide Valerie Jarrett's looks (in which Roseanne implied Jarrett looked like an ape) were Hulu and three cable channels owned by Viacom -- TV Land, Paramount Network and CMT.

Not to mention ABC itself -- which canceled the new “Roseanne” even though it was at the time the highest-rated “new” comedy to come along on network television in many a year.

Cut to the present day, and what have we here? The original “Roseanne” is inching its way back onto TV. In January, the NBC-owned diginet known as Cozi TV will start running the old “Roseanne.” The mini-net has already begun airing enthusiastic promo spots ballyhooing the show's return.

On Cozi, “Roseanne” will join a roster of hallowed TV classics that includes “Murder, She Wrote,” “Little House on the Prairie,” “Highway to Heaven,” “Frasier,” “Will & Grace” and “The Office,” to name a few.

Of course, no mention is made in the Cozi promos of the tweet scandal that got Roseanne banished from TV -- except for Fox News Channel, where she did a couple of interviews.

But her banishment was not as complete as it may have seemed. Just a few months after the Viacom cable channels dropped “Roseanne” in spring 2018, they resurrected the show for a while that very fall, to coincide with (and take advantage of) the premiere of the “Roseanne” spinoff called “The Conners” that ABC premiered that season.

So much for “punishing” Roseanne and standing in solidarity with the multitudes who labeled her a racist, or worse, following the ape tweet.

It turns out that tweet or no tweet, the original “Roseanne” still has sufficient allure to make money. “Always the dollars. Always the [expletive deleted] dollars,” said a world-weary Joe Pesci in a famous voiceover near the conclusion of the Scorsese gangster movie “Casino.”

In doing some research for this TV Blog, I came to find out that the “Roseanne” reruns from way back never really went away completely. Amazon Prime Video is among the places where all of the old episodes are available today.

As for Roseanne herself, she never really went away either. Among other things, though it was tweeting that got her in trouble, she has not stopped tweeting nor closed her Twitter account. She is still there, tweeting at @TheRealRoseanne.

It is a Twitter handle reminiscent of President Trump's -- @RealDonaldTrump, who Roseanne openly and defiantly supports. In fact, she is booked for a live performance at Trump's Mar-a-Lago Club on Super Bowl Sunday in February.

What's the takeaway here? That Big Media's commitment to boycotts and banishments is ultimately malleable and changeable, depending on which way the wind is blowing.

The TV Blog remembers well the time in 2015 when NBC banished Donald Trump from its entertainment shows following his announcement that he intended to run for President, and in the process, slandered Mexican immigrants.

Well, that banishment lasted all the way until the following fall -- just a few short months -- when Trump was invited to guest-host “Saturday Night Live.” And now “Roseanne” is being showcased on NBC-owned Cozi.

Photo above courtesy of “The Talk” on CBS: The entire cast of the new “Roseanne” in April 2018.