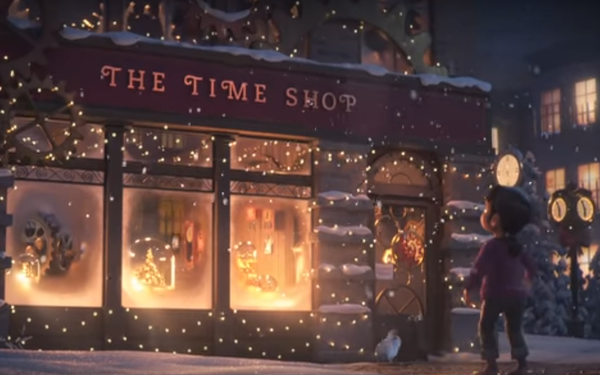 When Chick-fil-A did a national survey to help plan its holiday campaign, the responses did not indicate a desire for more chicken. People said they want to spend more time together, so the QSR chain is acting as a booking agent of sorts, using a pop-up store in Manhattan and an internet-based “time shop.”

During the “Together Time” campaign, visitors to the brick-and-mortar The Time Shop and website can create custom gift cards for friends and family that Chick-fil-A will mail free of charge. Each card bears the notation “This card is good for,” with suggestions ranging from “four hours of teaching you to ride a bike” to “three hours of our favorite board game.”

A two-minute animated  film  promoting “Time Together” tells the story of a family rediscovering the importance of time well spent. It centers on a frustrated young girl -- whose family is too busy to build a snowman -- and her magical visit to a fantasy Time Shop where she learns about “Lost Time,” “Time that Flies” and “Together Time.” The film debuted on Thanksgiving morning and will air on select television programming throughout December.

“During Christmas and the holiday season, so much of the conversation revolves around gifts. When we asked people what matters most to them, the resounding response was, ‘time,’” Ashley Callahan, Chick-fil-A senior marketing director, said in a statement. “This year we’re excited to help people gift and spend time together.”

Conducted by research firm The Bantam Group, the survey determined that on average, respondents spend 14 hours per week with people they care about but wish they could spend significantly more.

Social media is the #1 thing people would be willing to sacrifice to spend more quality time with others. This is especially true among millennials (57%) and parents (55%).

“Years from now, we might not remember what gifts we received, but we will remember how it felt to be with the people we love,” said Callahan.

Although the privately owned Chick-fil-A does not release financial results, it’s considered to be among the most profitable QSR chains on a per-location basis, even though its restaurants are closed on Sunday.

In a year marked by the “chicken wars” with Popeyes, foot traffic at Chick-fil-A locations increased by 13% in the first 10 months of 2019, according to Placer.ai. This compares with a 9.1% rise in traffic during the same period in 2018.