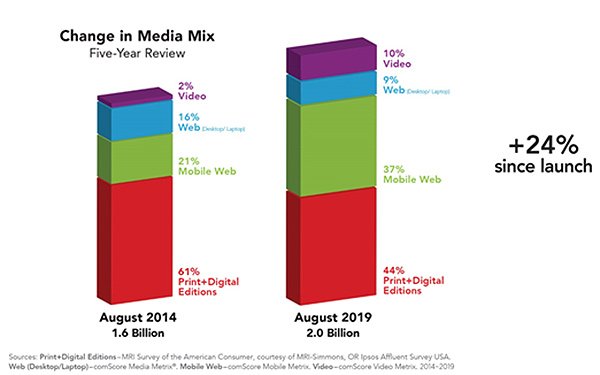 The biggest finds from the report: Magazine media has reached a total audience of 2 billion and is more engaging to consumers online than non-magazine brands. (Magazine brands are defined in the study as titles traditionally founded on a print product.)

The report found that 81% of the time, audiences to magazine media sites are more engaged than those consuming similar content on non-magazine brand sites.

“Magazine brands have evolved into true multimedia platforms that grab and hold the attention of audiences,” stated Linda Thomas Brooks, president-CEO of MPA.

“The pie itself has grown larger, with the pieces inside taking on different sizes in the past five years,” stated Jeri Dack, director of research initiatives at MPA.

This is a reflection of the shift from the larger computer screen to the smaller mobile screen of tablets and cell phones in the last five years, according to MPA.

As for social-media engagement, MPA compared the number of social actions (likes, comments, favorites, retweets, repins, sharing) to the number of posts on Facebook, Instagram and Twitter, by publishers.

It then compared magazine and non-magazine brands by social network, across 15 content categories.

Throughout the nine consecutive quarters of tracking engagement metrics by category, magazine brands’ averaged higher on both Facebook and Instagram than non-magazine brands. On Twitter, the two sectors tracked closely over the five years.