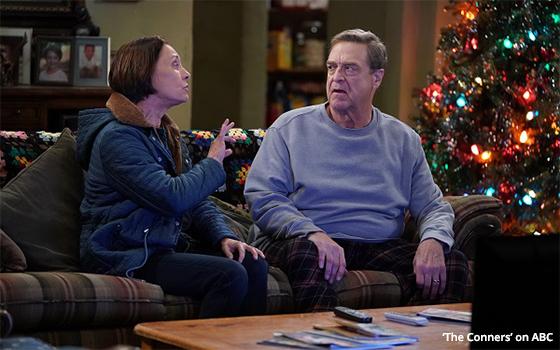 The ghost of Roseanne literally haunts “The Conners.”

It was surprising to hear the name Roseanne uttered during a recent episode of the ABC spinoff series that was created after the “Roseanne” revival of 2018 imploded along with Roseanne Barr’s decades-long relationship with ABC.

Her name came up in the Christmas-themed episode of “The Conners” that aired last week (Tuesday, Dec. 10). In the show, the Roseanne Conner character is deceased -- and has been dead and gone since the spinoff series’ premiere episode more than a year ago.

This would seem to preclude Roseanne Barr from ever rejoining the show in the event that her image somehow undergoes a rehabilitation acceptable to America’s court of public opinion.

In fact, like the death story that was contrived to explain the absence of the Charlie Sheen character on “Two and a Half Men” after he too flamed out, the Roseanne death scenario seemed especially contrived to signal that the new “Conners” spinoff would have nothing do with her or her memory.

But here we are at the halfway point of the show’s second season and the ghost of Roseanne Conner is very much on the family’s mind.

In last week’s episode, she was the topic of conversation between her now-widowed husband, Dan (John Goodman), and her sister Jackie (Laurie Metcalf) -- both seen in the above photo from the show.

The issue is that Dan has apparently begun to see another woman, Louise, who owns a local bar -- played by Katey Sagal. And this is not sitting well with Jackie, who lectures Dan about Roseanne and her position as the head of the family -- portraying her late sister as the family’s most important and most influential member.

A cynic who has observed the TV business for a very long time might wonder if ABC and “The Conners” are conspiring to set the stage for a Roseanne Barr guest appearance.

Certainly, unless they plan to concoct a “bad dream” scenario in which Roseanne was never dead at all, it would be impossible to bring back the character permanently. But bringing her back in flashbacks would not be something anyone should put past a TV network.

On the other hand, it might also be possible that few of her former cast members, producers or other co-workers would look forward to having her on the set. ABC execs might not have the fortitude for it either.

How is the show doing without her? Well, by now, the family as it is currently constituted is more than enough to sustain this family sitcom. As it happens, the only time a viewer is reminded of Roseanne at all is when the characters bring her up.