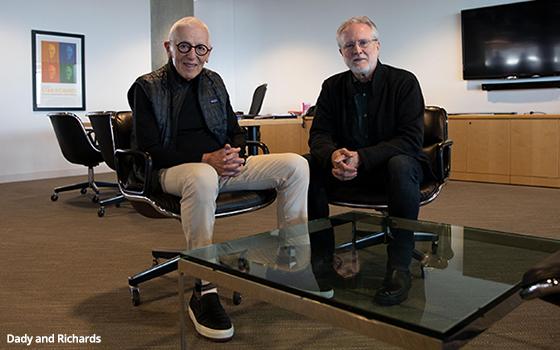 Stan Richards, founder and creative director of The Richards Group, is passing the baton to successor Glenn Dady, effective January 1. Dady has worked at the agency for 39 years and has led creative direction for some of the agency's more iconic work, including Chick-Fil-A, Go RVing, Biltmore Estate, and Jeep.

While Dady will oversee day-to-day responsibilities, 87-year-old Richards has no plans to retire. He will remain actively engaged in business, particularly to help transition Dady into his new role.

"Glenn has been by my side for nearly four decades and has played a critical role in making The Richards Group what it is today," says Richards. "He has always been one of the most innovative, imaginative creative leaders of the agency — but maybe most importantly, no one has done more to identify and nurture the talent so critical to the work we do than Glenn.”

There are no plans to change the direction nor status of the proudly independent agency. “Obviously, we’ll remain fiercely independent, as Stan has always intended," explains  Dady, who will take the title of principal/creative director upon the transition. "It’s such a luxury not to be concerned about shareholders, numbers, or politics. And continuing to have Stan in the office every day is the ideal situation for me — being able to bounce ideas off him and go to him for advice and counsel. It doesn’t get any better than that.”

The announcement was shared first with the agency's 752 employees during Friday's annual year-end meeting and agency clients were alerted shortly thereafter. By all accounts, the news was met with enthusiasm and support.

“Glenn is an extraordinary human being. As humble as he is talented. Fair, kind, and smart — we are in great hands,” said Richards. “This is clearly a very personal and professional decision for me, and there’s no one more qualified to continue to keep us at the forefront of the industry than Glenn Dady.”