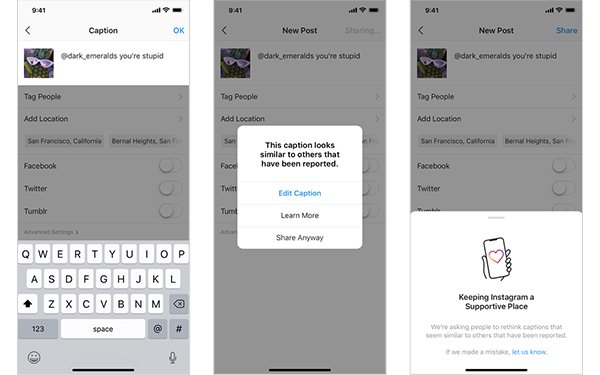 Instagram on Monday unveiled a new feature that notifies users when their photo or video captions might be considered offensive.

If flagged, Facebook’s popular platform will give users the chance to reconsider their choice of words before posting.

Anti-bullying has been a major focus for Adam Mosseri since he took over as head of Instagram, last year. “There is no place for bullying on Instagram,” the unit head declared not long after his appointment.

As part of that effort, Instagram has developed and tested AI that can recognize different forms of bullying on its platform.

Earlier this year, Instagram launched a similar feature that notifies users when their comments might be deemed offensive. Results from that feature have been promising, according to the unit.

Now, when users write a caption for a feed post and Instagram’s AI detects the caption as potentially offensive, those users will receive a prompt informing them their caption is similar to those reported for bullying.

In addition to limiting the reach of bullying, the new warnings are designed to help educate users on what sort of content is not permitted on Instagram. Also, when their accounts might be at risk of breaking platform rules.

The new feature will first be rolled out in select countries, and then globally in the coming months.

Facebook’s flagship platform has had a similar system in place since 2016, but only felt the need to include Instagram in the initiative, this year.