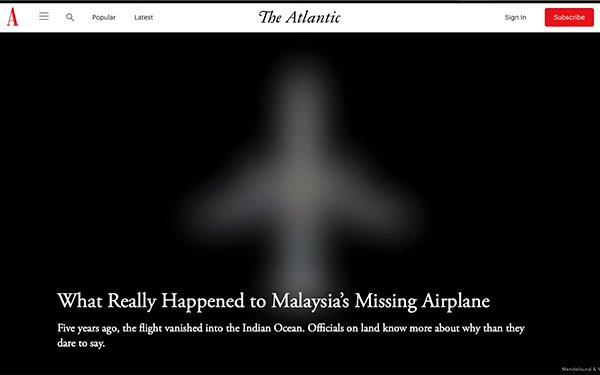 Chartbeat, the digital publisher data and analytics company, has revealed its annual list of most engaging stories of the year.

No. 1 on the list is a long-form story from The Atlantic: “What Really Happened to Malaysia’s Missing Airplane,” by William Langewiesche. The article was read for more than 30 million total engaged minutes, or the total amount of time visitors spent actively reading and interacting on the page.

Langewiesche’s New York Times Magazine article on the Boeing 737 Max also made the list, at No. 37.

“This year’s Most Engaging Stories list is a strong reminder that readers still have a huge appetite for long-form journalism,” Chartbeat CEO John Saroff stated. “It is no coincidence that human-interest stories top the list — original narratives have consistently resonated with audiences in the 10 years Chartbeat has been measuring reader engagement.”

Human interest and features scored well, though celebrity profiles were less prominent compared to last year’s list, replaced by stories about individuals. For example, CNN's "This college dropout was bedridden for 11 years. Then he invented a surgery and cured himself" made it to No. 3.

Investigative pieces, rather than breaking news, saw high engagement, such as Vice’s piece on uncovering a nationwide Airbnb scam.

Stories on President Trump and Brexit also ranked on the list.

In the five years since it started publishing the "Most Engaging Stories" list, the company says it has "seen interest rise in offbeat topics and non-breaking news pieces," according to a blog post about this year's list.

Stories are ranked and analyzed by Chartbeat's data-science team, which examined 54.3 million pieces of content published in 2019.

The top 1,000 articles were then sorted by total engaged minutes, individually reviewed and narrowed down to 100 stories based on a series of qualitative criteria.

The top 10 stories on the list were published by The Atlantic, Politico, CNN, The Washington Post, BBC, Yahoo Japan,ESPNand Infobae.