Mergers And Streaming Services: TV Was All Business In 2019 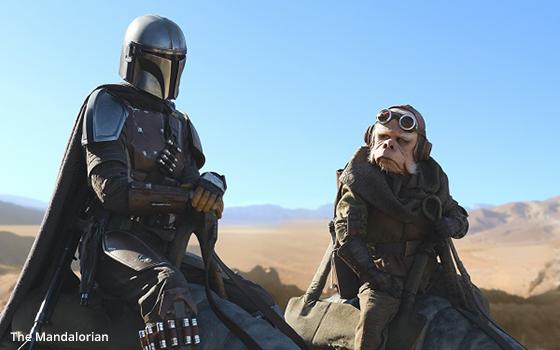 The biggest stories in TV this year were mostly business ones -- mergers, consolidations and, perhaps most conspicuously, the emergence of new, powerful entrants in the arena that has increasingly come to represent the future of entertainment video consumption -- subscription streaming.

Where the streaming story was concerned, November was the month when Apple and Disney both launched their new streaming services Apple TV+ and Disney+ (home of the “Star Wars” spinoff series “The Mandalorian,” pictured above).

Not to be outdone, the new WarnerMedia that very same month took up the opportunity to exploit all of the attention being paid to the Disney and Apple launches to announce its own rollout plans for its new streaming service, HBO Max, launching next May.

And just weeks before, NBCUniversal began what would begin a string of announcements throughout the fall about its streaming service -- called Peacock and set to launch next April.

The cluster of launches and announcements from three of the world’s biggest media companies -- plus smartphone maker Apple -- meant that the streaming business would now be entering a new, mature phase.

The one company that could be most adversely affected: Netflix, which had come to dominate the business.

With two of the majors set to make their debuts next year, the continuing emergence of streaming powerhouses stands a pretty good chance of making next year’s year-end news roundup as well.

At least one of the new streamers launching next year would not have even been possible if AT&T had not cleared all of the regulatory hurdles that had been preventing it from closing on its deal to absorb the Time Warner TV assets.

These included the Turner cable networks, Turner Sports, HBO and various Warner production and syndication entities. The deal was finalized this year, and out of it came a new company, WarnerMedia.

In a similar vein, in which the joining of two companies resulted in the conversion of two words into one, CBS and Viacom finalized their own long-awaited merger, which was years in the making.

The resultant entity was christened ViacomCBS. And just like that, CBS ceased to exist as a stand-alone company. To add insult to injury, CBS’s new overseers at Viacom put CBS’s landmark headquarters building in Manhattan up for sale.

But all of that was behind the scenes. On camera, the one single TV show that made the most headlines in 2019 was “Jeopardy!” The reasons varied.

One was the revelation last May by long-time host Alex Trebek that he had been diagnosed with pancreatic cancer. Millions were affected by this alarming news about one of TV’s most unique and best-loved personalities.

For the remainder of the year, Trebek waged a battle with his disease, while somehow managing to not miss a single day of work hosting “Jeopardy!”

As if this drama was not enough, “Jeopardy!” also spawned one of its greatest all-time champions, a sports handicapper from Las Vegas named James Holzhauer who won 32 consecutive games from April to June. He later won the annual Tournament of Champions.

The year 2019 began last January with the strange story of actor Jussie Smollett, who may or may not have made up a story about being assaulted on a dark Chicago street by two men who he said were yelling racial slurs. The story seemed more false than true, and it got him bounced from his prime-time series, “Empire” on Fox.

The Democrats held a series of televised debates, culminating with the debate this month that drew some of the lowest ratings of any of the debates held this year, indicating perhaps that we are already tired of the 2020 presidential election campaigns, and it’s not even 2020 yet.