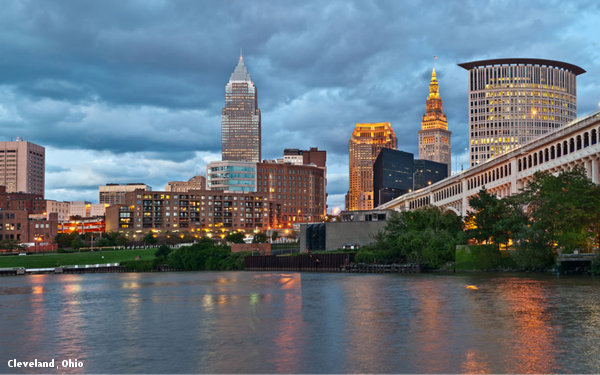 Rally! Verizon wireless promised it would begin 5G Ultra Wideband Service in 30 cities by the end of 2019.  It went beyond that goal, to 31 cities, launching in Cleveland, Columbus  and Hampton Roads, Virginia on Dec. 23.

Like the 5G service from AT&T and T-Mobile, Verizon’s presence in big cities is really limited, but the inaugurals give the wireless service a chance for some local marketing  — and, more widely, time to plan ad campaigns for the entire nation to convey the image of 5G technology leadership.

Verizon’s 5G service in the Hampton Roads area is “initially available” in “part of the Virginia Beach Oceanfront” and downtown Norfolk and several other smaller cities.

In Cleveland, it’s the same story, different town. The carrier’s 5G is in parts of downtown and around some landmarks.  Cleveland also hosts the first 5G Verizon Innovative Learning classrooms. And the service will be available in the lower level of the stadium where the NFL’s Browns play, making it the 15th team with 5G for some of its fans. (You’ll have to take Verizon’s word on that for a few months. The Browns played and lost their last home game of the season on Dec. 22, one day before Verizon says it turned it on.)

In Columbus, Verizon 5G will be in parts of downtown, at several Ohio State University sites and some shopping centers. The big news is that 5G is now available at the John Glenn Columbus International Airport, though only in parts of the ticketing area. Nonetheless, it’s the nation’s first airport with Verizon’s 5G service.

AT&T 5G service is available in 10 cities. Its version of 5G uses low-band spectrum that reportedly slows speed but gives the service wider range.  The very best 5G+ AT&T currently has is available in about two dozen cities -- but only to a handful of businesses. Verizon also has a super-duper 5G version, but in very limited areas, too.

T-Mobile probably has the most solid 5G coverage. It claims to have “nationwide” coverage from coast to coast, serving 5,000 towns that make up 60% of the nation’s population. Its low-spectrum version is said to be similar to AT&T’s.