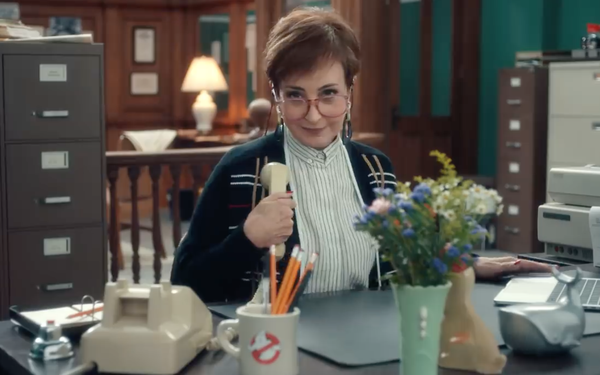 Intuit QuickBooks is launching a national campaign featuring notoriously grumpy movie characters who reveal it was the stress of running a small business that made them that way.

But the characters have switched to QuickBooks, making their lives easier and giving them a whole new attitude.

Themed, “The Easy Way to a Happier Business,” the effort broke Dec. 28 with a spot featuring Annie Potts reprising her role of cranky Janine Melnitz in “Ghostbusters.” Slimer, one of the “stars” from the first film franchise, also makes an appearance.

Another spot features Martin Kove reprising his role as John Kreese, the “sociopathic” owner and sensei of Cobra Kai dojo in “The Karate Kid” franchise.

The effort includes TV, digital and social. It will run through 2020.

TBWA/Chiat/Day Los Angeles is the creative agency and Heart & Science handled media for the campaign, which is directed by Harold Einstein.

The campaign is the third installment of an ongoing marketing effort themed “Backing You" that aims to highlight the emotional perks of being a QuickBooks user.