How Dull Is TV Now? We Are Literally Watching Paint Dry 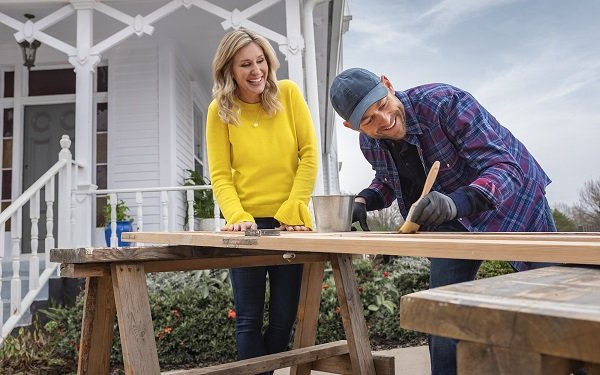 It occurred to me the other day while grazing around the cable channels that TV today has a knack for turning the mundane into entertainment -- or at least it attempts to do this.

The subject of this TV Blog arose specifically while checking in on one of the HGTV renovation shows -- the one called “Home Town,” in which husband-and-wife renovators Ben and Erin Napier restore homes in Laurel, Miss., the small town in which they live.

This one-hour show has the couple alternately discussing their renovation plan for a featured house, then going about the business of demolishing various interiors and then fixing them up again -- just like a dozen or more other shows on HGTV (such as “Fixer to Fabulous,” pictured above).

Between the segments in which the couple appears to be getting things done, the show has these interludes where the two are seen bantering about the project and their lives.

These play like roadblocks and time fillers that help to explain why this show's episodes are each an hour in length.

This is not a diatribe meant to impugn these Napiers in any way. They seem like very nice people, and I admit I have enjoyed their show from time to time. And the impetus for this column does not derive from their show alone.

It also came to mind not too long ago while watching one of the other HGTV shows (it may have been “Fixer Upper”) in which one of the renovators had just painted part of an interior wall and was standing back and admiring his handiwork.

That was when I had an epiphany: It is has come to this -- we are now actually watching paint dry on TV!

“Watching paint dry” has long been a euphemism for an activity whose obvious monotony induces extreme boredom.

Some people use “watching the grass grow” to put across the same idea. And perhaps that phrase is applicable to some of the home shows that focus on exterior spaces such as gardens and lawns.

Other activities seen on TV that have animated this same line of thinking are the many scenes -- often accompanied by upbeat music -- in which the home renovators are seen running a table saw, punching in nails with a nail gun, prying off old baseboards and kitchen cabinets with crowbars or sinking various holes with a power drill.

Recently, it dawned on me: Why am I wasting my time watching someone drill holes in a wall?

It is almost like the famous answer George Costanza gave the fictional NBC programming exec played by Bob Balaban in a long-ago “Seinfeld” episode when the man asked George and Jerry why anyone would watch their proposed sitcom about nothing.

And George replied pointedly, “Because it's on TV!” -- as if that alone would be enough to draw an audience sufficient for the network to make a profit on the show, even a show such as the one George was proposing in which “nothing” would happen.

Well, now we have a multitude of shows in which nothing (or next to nothing) happens, and the channel lineups are full of them.

And they are not only HGTV reno shows either. The same line of thinking can extend to any number of “reality” shows in which families are seen in the act of living their ordinary lives.

Oh, look, they are feeding the triplets breakfast! Isn't that cute? Oh, wait a minute, why am I watching this? Because it's on TV!

television
1 comment about "How Dull Is TV Now? We Are Literally Watching Paint Dry".
Check to receive email when comments are posted.
Next story loading