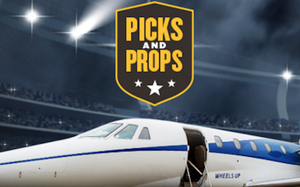 It’s safe to say few patrons of Buffalo Wild Wings get to fly to major sporting events on private jets. BWW is looking to change that with a recent partnership with MGM Resorts International’s BetMGM digital gaming platform.

The promotion is a way to drive more traffic within the Buffalo Wild Wings Blazin’ Rewards mobile app, which contains the sports bar chain’s Picks and Props mobile game powered by BetMGM.

Picks and Props was designed to provide a free sports-betting experience—for example, making sports game picks based on the point spread—with no stakes and the potential to win prizes. Props is a reference to wagers based on occurrences or non-occurrences during a sporting event.

While fans can play Picks and Props anywhere, they must check in at a Buffalo Wild Wings sports bar between Thursday and Sunday of a given week to be eligible for prizes.

Starting yesterday and extending to Feb. 2, users of Picks and Props began to amass points for the private-jet excursions based on their sports game picks. The Picks and Props champion with the best overall week from Jan. 1 to Feb. 2 will be flown to four sports games of his/her choosing via jet charter company Wheels Up.

In addition to the four-game grand prize, participants can win a trip to Vegas, free wings for a year and Buffalo Wild Wings gift cards.

In September of 2019, BWW and MGM announced what was described as the first alignment between a national sports bar and a gaming company. The multiyear partnership was designed to deliver sports gaming experiences at a national scale inside BWW locations, including states where sports gaming has been legalized.

BWW’s most recent television campaign features a social media commentator who goes by the name Randy612 and posts such comments as “if u like boneless wings…u dirty.” A voiceover then explains how the chain has completely reinvented the wings experience, adding the rejoinder, “Hey poster boy, your basement isn’t going anywhere!”