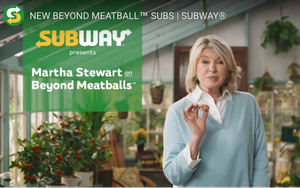 What do Martha Stewart and the Hooter Girls waitresses at Hooters restaurants have in common? They’re all amazed at the taste of plant-based meatballs and chicken-free wings in new campaigns for Subway in Canada and Hooters in the United States.

In a video for Subway Canada, lifestyle guru Stewart provides a tongue-in-cheek explanation of her eight-week guide to “growing” a marinara version of plant-based meatballs on miniature trees. “They must be kept at approximately 62.7 degrees Celsius. Any higher and I fan them by hand,” Stewart explains as she tends to one such fully grown tree.

“Subway had me at 'an exciting new plant-based protein choice,' because that's perfect for my lifestyle,” Stewart said in a news release.

In reality, the meatballs that inhabit Subway’s new Beyond Meatball subs are supplied by plant-based food marketer Beyond Meat.

Subway is using a wide array of media for the new campaign, including digital, out-of-home, television and radio, a Subway rep tells Marketing Daily.

Last September, Subway began limited-time testing of Beyond Meat marinara meatball subs in California, Indiana, Kentucky, Mississippi and Pennsylvania, as reported by VegNews. The chain has yet to roll them out nationwide.

For the rollout of Unreal Wings at 318 Hooters restaurants, the new campaign features Hooter Girls in Arizona, Florida and Georgia expressing surprise that the boneless wings do not contain meat. “The world’s first unreal wings,” says the voiceover.

“The rise of meatless options, especially at quick service and fast casual restaurants, has largely centered on burgers, and we’re excited to partner with Hooters to roll out the first meatless poultry item on a national scale in the U.S.,” Quorn CEO Kevin Brennan said in a statement

The Unreal Wings campaign is running on social media and mobile video platforms plus national and local cable television, according to a Hooters rep.