Why You Will Never Know How Big The Australian Fires Are 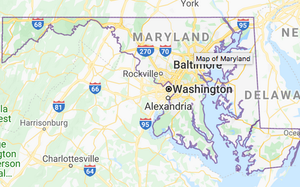 I suspect that if you grew up going to a public school somewhere in Maryland, you would recognize the above map. Somewhere on there belong Baltimore and Annapolis, the suburbs of Washington DC, and whatever else is in Maryland, but no one knows, since it is mostly a passthrough for I 95 and I 81.

Isn’t one of those dots off the coast that island with all the wild horses? And wasn’t the "Star Spangled Banner" (one of the world’s least sing-able anthems) inspired by the bombardment of a fort somewhere in Maryland? The Battle of Antietam was fought over the panhandle, as I recall.

At any rate, this is not a quiz about Maryland per se, but the size of it. Because not a day goes by that I don’t read that the Australian fires, if all gathered together, would be “twice the size of “Maryland.” Since journalists tend to repeat what has already been written (if they think it is from a trusted source), Maryland has become the go-to state to size the disaster down under.

The problem, as you can see from the outline, is that the state is so gerrymandered in design that no one has any idea just how big that would be. Even if you gave your kid some scissors and said, “OK, now cut Maryland into smaller pieces and see if you can make it into a square,” they would rightfully argue that it’s too hard and it would take valuable time away from TikTok.

Besides, you are left with a block that is meaningless UNLESS you overlay it on a state that everyone knows the size of, like Texas or Iowa. Oh, and then you have to double it, so that was kind of pointless.

Increasingly, we live in an age where words are less important and images are everything. So why in the hell would you pick an image that has the Chesapeake Bay running up the middle of it?

What if someone told you Maryland is exactly 12,406.68 square miles? Does that help? Me, neither. It would be pretty impressive if they lit the entire state on fire and then shot some video from the space station. That might help. But I would not want to deny Lamar Jackson a home game.

Before Grono launches his ballistic missiles in my direction, I want to emphasis in no uncertain terms that I am in no way making light of the seriousness of the fires in Australia. I hope that each of you makes a donation or two to organizations that will provide resources to fight the fires and relief afterwards.

This is one situation where Americans can all agree, and show the Aussies that we love them.