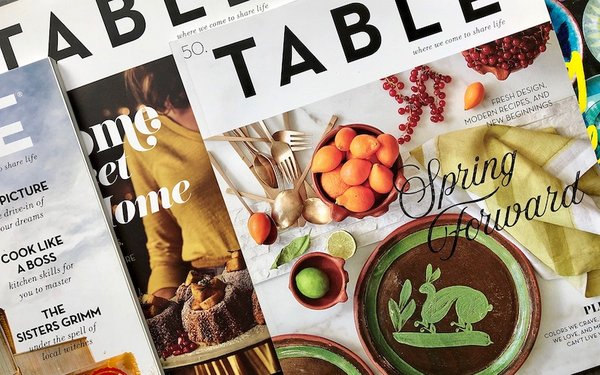 Local magazines can carve out distinct regional niches, while broadening their digital appeal. That’s the case with the glossy bimonthly ‘Table’ magazine.

Based in Pittsburgh, it includes two special editions — “Celebrations,” about weddings, and “Recipe Book,” that showcases regional recipes — as well as a sleek, user-friendly site.

The latest twist on the nearly 14-year-old magazine: It has new owners: Keith Recker, Table's editor in chief, and Justin Matase, associate publisher for the Pittsburgh City Paper. Financial details were not disclosed, but the two bought the magazine from former owner Christina French, who will remain as a consultant through 2020.

Recker is looking to expand Table and generate more revenue with added digital content and food events, such as its Western Pennsylvania Lamb Cook-Off/Lamb Fest.

Matase will keep an affiliation with the Pittsburgh City Paper as a strategic advisor.Recker is also president of Hand/Eye magazine, an online pub about textiles and artisan crafts.

“We are focused on food and drink and the local creativity from those zones, but we’re also going into fashion, design, travel and other forms of creativity and experience,” Recker told NEXT Pittsburgh. Plus, he’s addingtwo concept issues per year, each on a single theme.

In addition, it also offers winter recipes for beets, Asian pear pound cake and a guide to making the best coffee.

The magazine publishes 30,000 copies each issue, with 20,000 paid subscribers. The rest is split between single-copy sales and free distribution to advertisers and high-profile retailers. Table has 10,000 active op-in subscribers for its emails.

French said the duo would “offer creative packages to advertisers, sponsors and collaborators” looking to share the Table story in meaningful ways.