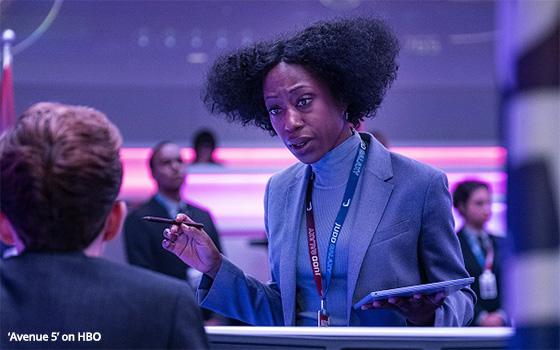 In the future, human beings will screw up just like they do now.

This seems to be the principal lesson to be gleaned from a new futuristic comedy series premiering Sunday night on HBO.

The time frame is unspecified, but the show takes place at a time when recreational cruising in outer space is apparently commonplace. The name of this particular cruise ship is the Avenue 5 -- a name whose derivation is not explained in the series premiere.

This series seems to have been inspired by occasional news stories that pop up now and then about our present-day cruise ships in which mishaps occur.

These can include the sudden spread of food-borne illnesses, abrupt changes in weather that jar the ship and perhaps injure some passengers, and occasional power failures that leave ships without electricity to broil in the middle of balmy oceans.

“Avenue 5” seems to ask the not-so-burning question: What if something like these unfortunate occurrences were to occur in the future world of outer space cruising?

In “Avenue 5,” the answer is: An eight-week intergalactic vacation is now to be extended for as long as three years or more, due to a crippling, unforeseen, possibly manmade error that throws the ship off course just enough to add these three years to its itinerary.

Before you start humming the melody from “Gilligan's Island” with “three-year” substituting for “three-hour” (as in “three-hour tour”), please bear in mind that (a) substituting “year” for “hour” does not really work in the context of the “Gilligan” theme music and (b) there is no evidence that the passengers and crew of the “Avenue 5” will be almost rescued in each episode, only to have these near-rescues derailed by a bumbling first mate.

Having said that, bumblers abound on the Avenue 5, including the captain (played by Hugh Laurie), the cruise line's eccentric owner (played by Josh Gad), the ship's “customer experience” specialist (played by Zach Woods) and just about everyone else.

In addition to this outer space cruise liner itself, a glimpse of this future world is given during a brief soliloquy delivered by the skipper as he assesses the damage to his ship and its consequences.

When an assistant laments that this is the worst catastrophe “since Google folded,” the skipper expresses confidence that the cruise company's mission control staff on planet Earth will fix the problem.

Says he, “They'll figure this out. They turned the moon into a massive jail, they patented the liquid glove. … How hard can it be to reset a course?” It is a clever twist on what people say in our real, present-day world whenever there is a big problem to be solved: “They put a man on the moon, didn't they? Surely they can [insert complicated situation here]."

Well, the truth behind those statements is this: Putting a man on the moon, while undeniably complex, has nothing to do with the other problem at hand that putting people on the moon is being compared to. Thus, the comparison makes little or no sense.

In “Avenue 5,” engineers cannot even fix a communications glitch that has the ship and mission-control trying to talk with each other while experiencing a 24-second delay between each of their statements (due to the distance from Earth to space).