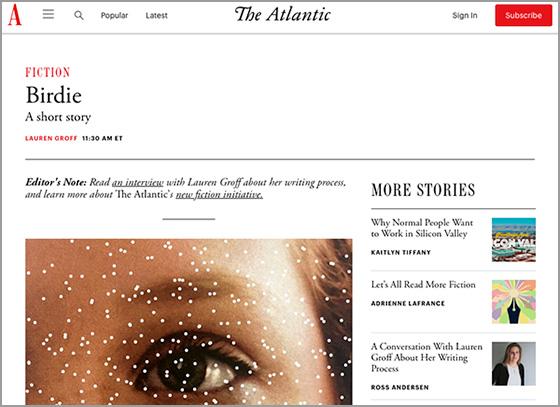 The Atlantic’s new fiction section will publish short stories "with far greater frequency than we’ve managed in the past decade,” executive editor Adrienne LaFrance wrote in an introduction to the section.

It debuts today with “Birdie,” a new short story by Lauren Groff about the secrets kept by childhood friends.

Groff’s first story in The Atlantic appeared in the magazine's 2006 fiction issue.

“The Atlantic’s archives are teeming with the bylines of some of the greatest literary writers of the past two centuries … many of whom made their debuts in the magazine,” stated the company.

The dedicated fiction section “marks a commitment to publish original fiction regularly on the site, in addition to several times each year in the magazine,” according to The Atlantic.

The effort is being led by senior editor Thomas Gebremedhin.

“The thinning of print magazines this century has often meant a culling of fiction,” LaFrance wrote to readers. “There has sometimes been a vague sense that rapid technological change would push people toward nonfiction instead — that concrete facts might be valued over imaginative exploration and existential truth.”

"We still need stories and fiction specifically — storytelling is a defining characteristic that makes us human," she added.

The Atlantic launched a dedicated books section in 2018, which publishes reviews, criticism, essays and author interviews.