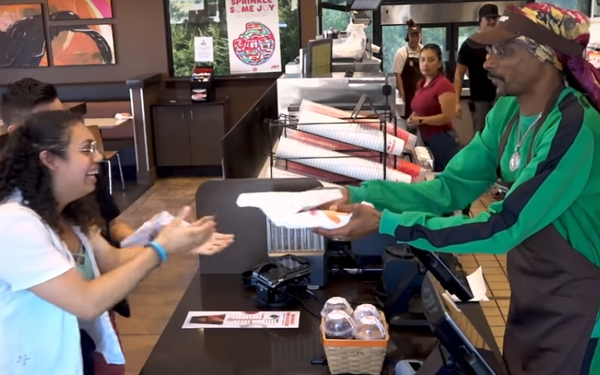 Just over two months since its national launch of the Beyond Sausage Sandwich, Dunkin’ is doubling down on brand personality Snoop Dogg. He’s the front man in a new national TV campaign for the plant-based menu addition and a limited-time online apparel shop based on his sartorial selections.

After testing last summer, Dunkin’ launched the Beyond Sausage Sandwich on Nov. 6 with rapper/singer/songwriter and Beyond Meat ambassador Snoop as the surprise “employee for the day” at a Los Angeles Dunkin’ location.

Scenes from his Los Angeles appearance form the basis for a new national television spot in which Snoop dons a company uniform and serves surprised patrons behind the counter and drive-through window.

For this week only, participating Dunkin’ stores are hosting a Snoop “menu hack” in the form of a Beyond D-O-Double G sandwich consisting of Beyond Sausage, egg and cheese served on a sliced, glazed donut.

As Dunkin’ continues to expand its food menu with Beyond Sausage, a BBQ bacon breakfast sandwich and new breakfast bowls, the franchise-only chain of some 9,500 U.S. restaurants remains “beverage-led,” according to a recent financial presentation.

Based on data from The NPD Group/CREST, Dunkin’ is the No. 1 seller of drip and iced, brewed coffee and No. 2 in cold-brew coffee. In the company's recent third fiscal quarter, espresso sales increased more than 40% year over year, representing some 10% of sales.

The chain’s “next generation” restaurant design -- present at some 400 locations -- features an eight-headed tap system for dispensing iced beverages and fostering a “bartender culture,” in the words of David Hoffman, CEO and president of Dunkin’ U.S.

As the company’s beverage aspirations expand, it finds itself competing for what may some unlikely customers. For example, 20.3% of visitors to Starbucks in 2019 had an average household income exceeding $100,000, compared to 19.5% for Dunkin’, according to place-based data provider Placer.ai.