Who's The Greatest Of All Time? Alex Trebek, Of Course 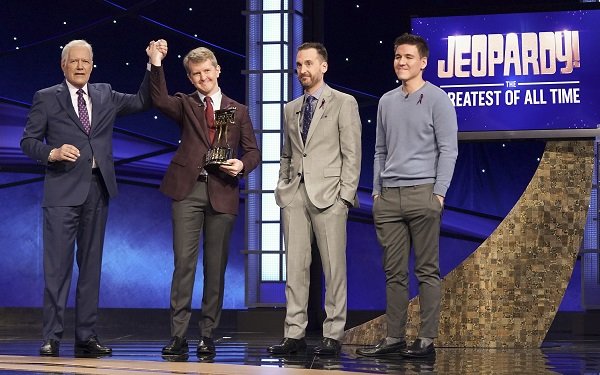 Ken Jennings emerged from the four-day prime-time “Greatest of All Time” face-off on ABC with that title after defeating fellow “Jeopardy!” phenoms James Holzhauer and Brad Rutter.

ABC was a big winner too, at least according to the network's own press releases ballyhooing the ratings for this event series.

The network announced total viewership for the show's first three installments on the evenings of Tuesday, Jan. 7, Wednesday, Jan. 8, and Thursday, Jan. 9, as 16.1 million, 16.5 million and 17 million, respectively.

The network also declared victory in the demo (18-49), scoring ratings in the category of 2.7 on nights 1 and 2, and 2.5 on Night 3. As of the writing of this TV Blog on Wednesday morning of this week, the ratings had not yet come in for this week's finale on Tuesday night.

The numbers ABC provided for nights 1-3 represented inclusive figures encompassing viewing of the shows from their original airings on ABC through three days of delayed viewing “across all platforms,” as networks are fond of saying these days.

This is all fine and good, although the TV Blog has no doubt that the first or “live” airings of the shows probably earned viewership figures that would likely have been impressive all on their own.

While it might be true that some (if not many) people watched the shows after they aired, the nature of this kind of competition would seem to have lent itself to “live” viewing, like sports events.

The show itself was a great idea. And it can be counted as a huge success.

Adding to its significance is the continuing battle that long-time “Jeopardy!” host Alex Trebek has been waging since at least last March when he announced he has pancreatic cancer.

Somehow, he has not missed a single episode of “Jeopardy!” over all of these months as he has undergone cancer treatments that have been known to take an extreme physical and emotional toll on patients. And yet, here he was presiding over a prime-time event series that will likely emerge as one of the year's best shows.

In this context, Trebek is like some sort of TV warrior who has maintained a level of professionalism in the carrying out of his responsibilities that is awesome and awe-inspiring.

And by the way, no one would have thought any less of him if back in March he had announced he would be retiring from “Jeopardy!” in order to deal with his illness. He would still be considered the greatest quiz show host of all time whether he had continued or not.

As it happens, his contract is up this year. With his health in question, it is a strong possibility that this will be the year Alex Trebek steps down from “Jeopardy!”

In a 2018 interview with Harvey Levin for Fox News, Trebek even indicated then that the odds of him renewing his contract in 2020 were less than 50/50. And that interview did not even include any inkling that Trebek would announce a cancer diagnosis the following year. Next summer, Trebek will be 80 years old.

In some of the coverage and in ABC's publicity for “Jeopardy! The Greatest of All Time,” the show's title has been shortened in some references to “Jeopardy! GOAT,” owing to our culture's apparent addiction to acronyms and abbreviations.

GOAT in particular has come into common use to indicate The Greatest of All Time, even in headlines seen this week on some stories and commentaries about LSU capping an undefeated football season with a national championship the other night.

It should go without saying, but people and teams designated The Greatest of All Time are not goats. In fact, “goat” is not a word anyone would logically apply to someone or something that is considered “the greatest.”

Muhammad Ali was not a goat. The LSU Tigers are not goats either. And neither is Alex Trebek. He is no goat, and neither is “Jeopardy!” As a TV show that celebrates intelligence, “Jeopardy!” is the last of its kind.

Alex Trebek just might be the last of his kind, too.

television
2 comments about "Who's The Greatest Of All Time? Alex Trebek, Of Course".
Check to receive email when comments are posted.
Read more comments >
Next story loading