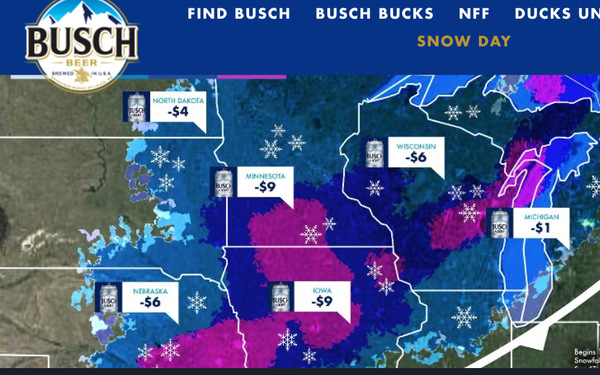 You’ll understand if some beer drinkers in a few cities known for bad weather are going to start hoping for a lot more snow.

Busch Beer announced that in some Midwest cities and Buffalo, it will rebate $1 off purchases of selected Busch packages for every inch of snow that falls, through March 21. Drinkers have to keep their receipts and submit it along with qualifying ZIP codes.

“Being a city that drinks its share of beer and shovels its share of snow has its perks,” wrote the Green Bay [Wisconsin] Press-Gazette, detailing the Busch Snow Day promotion.

The rebates go to consumers who purchase 18, 24 or 30 packs. Busch has details at a special website, which also includes a  beer-price weather forecast map.

Along with Green Bay and Buffalo, other snowy places where the $1-per-inch deal is in effect  are:  Des Moines, Iowa; Grand Rapids, Michigan; Minneapolis; Fargo, North Dakota; and Omaha, Nebraska.

Actually the the rebate goes to residents anywhere in the state where the cities are, so a Manhattan resident can take advantage of Buffalo’s misery just as well.

But an avalanche of snow would amount to just piling on. Busch limits the per-person rebate to $30 for the entirety of the time the promotion goes on, and it ends with the last day of winter, March 21.

Busch is among the Anheuser-Busch InBev brands that have been hurting as drinkers move either away from beer altogether or to more premium, import or craft beers.
So some incentives might work.  And though January is just one of the snowy months covered by the promotion, it’s also when Dry January happens---the effort by some drinkers to stay alcohol-free for the month.

There were a few less-than-sober reactions on social media. “There’s money coming out of the sky in WNY [Western New York]” reads one tweet that accompanies a photo of a snow-covered road.

Others towns and states not part of the promotion felt slighted. “Whatcha know #SouthDakota always catching the short end of the stick and missing out,” read one. And a few cursed Busch’s timing: “Last year when we had 6000 snow days, where were you @BuschBeer?” complained a tweeter in Wisconsin.