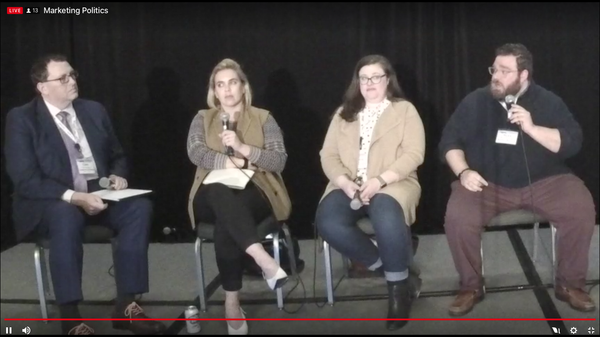 Back in 2018, Ross Rocketto, Co-founder of Run For Something (far right), was working with a client in Harris County, Texas, home of Houston. She was running for political office and needed to talk to more Latino voters. "She didn't have enough money to do a big mail piece but what she could do is put an ad on Univision. She won by a small margin."

Run for Something works with only local and state candidates from those running for the state legislature to the local dog catcher. Rocketto spoke on a panel, "Follow the Money: Allocation (And Reorganization) Forecasting 2020," at our Marketing Politics conference in Washington, D.C.

"I start from the same place: how many votes do I need to get, and work backwards from there. Look at tactics available, the amount of money you think you are going to raise. Most of our candidates are working off of hunches, knocking on doors, talking to people in their communities.

The trouble with many campaigns, he said, is that "you've got folks running campaigns, or doing general consulting, they came up in field, comms, the traditional parts of campaigns. The foundation of a campaign, the really siloed departments, it's just changing. You need to understand what other folks are doing. The 'magic digital stuff' was cute five, ten years ago. Now, you need understand how digital acts with organizing, how data plays into all of it. That is beginning to change with folks like Hilary [Nachem Loewenstein, Director, Bully Pulpit Interactive, second from right, who was also on the panel].

"A lot of our organizers end up moving on to run in the next cycle You might end up managing a statewide campaign. They've made organizing such a rigid activity. Lists are developed through model analytics and data, they get a set of five tactics, their days are structured for them.

"Basically, they're executing every task. When they move up, they don't really know what goes into the rest of the campaign. They've had their career handed to them. When they end up in leadership, as a campaign manager, there is no instruction manager. You have to tell the candidate what to do. How we're cross training people to make sure they understand different parts of campaign works. That's my TED talk."