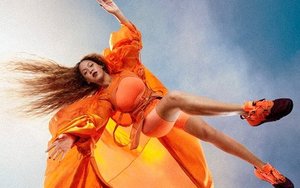 That thunderous noise around you is likely a stampede heading toward the long-awaited launch of Beyoncé’s Adidas X Ivy Park athleisure collection. Observers are hoping the new collection will put some pep in the step of the languishing sneaker and activewear category.

Beyoncé unveiled the new collection with a video for her tens of millions of Instagram and YouTube followers, as well as fun unboxing videos courtesy of pals Ellen DeGeneres and Reese Witherspoon. And while the 30-minute presale frustrated many trying to scoop up the fashion-driven line, it’s likely to give Adidas a major injection of buzz once it moves into wider distribution.

This is the second time around for Ivy Park, initially introduced through Topshop. Following a sexual harassment scandal that embroiled Sir Philip Green, head of Topshop parent Arcadia Group, Beyoncé bought back the name in 2018. She announced the Adidas partnership in 2019.

While Adidas says it is on track for another record year, the industry as a whole is plagued with soft spots. In his latest predictions for the category, NPD’s Powell forecasts mixed results in the year ahead, on top of a generally disappointing 2019.

While Powell forecasts big gains for D2C channels, “there will not be true organic growth here, but rather a share grab from their wholesale partners.”

He does see strength, however, in sport lifestyle lines, especially in retro looks. And he anticipates Lululemon continuing its roll, muscling Nike out of the way to become
the largest women's activewear brand in the U.S. in the next year or two.

Powell sees continued rough roads for performance shoes, especially in the basketball world. “Brands will see little to no return on mega basketball endorsement contracts because the business is much smaller now and continues to decline,” he says.

And he expects to see influencers’ impact decline, “as consumers recognize the inauthenticity of paid endorsers.”