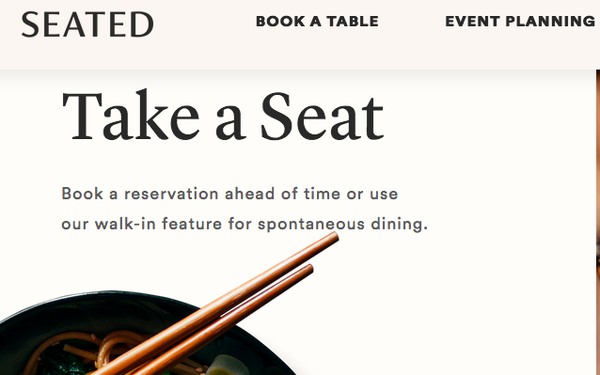 At one end of the restaurant food chain, Chick-fil-A is welcoming 2020 by handing out chicken nuggets to encourage loyalty program signups and sign-ins. At the smaller end, the mobile restaurant app Seated is helping sit-down restaurants book tables by partnering with companies like Amazon, Uber and Starbucks for rewards.

Starting last week, Chick-fil-A began giving away eight free nuggets—which in 2019 was the most popular of the chain’s entrees, for the second straight year—to those who create or sign in to a Chick-fil-A One account via its mobile app. The offer can be redeemed until Jan. 31 either in-restaurant, at drive-throughs or by placing a mobile order.

Those who prefer a non-meat loyalty incentive can exchange the nuggets for a Kale Crunch Side, a blend of kale and cabbage tossed with apple cider and Dijon mustard vinaigrette that has just been added to Chick-fil-A menus nationwide.

“By knowing their customers, Chick-fil-A and other brands can build an understanding of what motivates specific behaviors in their customers,” says Nicole Amsler, vice president of marketing at loyalty specialist Formation. “They can then create personalized offers for those diners based on those motivations that will lead to increased engagement and loyalty over time and facilitate a personalized customer journey from sign up onward.”

“Seated’s mission is to help the 330,000 sit-down restaurants fight the national occupancy rate of 36% that has plagued the industry for decades and led 50% of restaurants to close within three years of opening,” a Seated rep tells Marketing Daily.

Users of the Seated app can get up to 40% in rewards, based on their meal receipt, that can be used at more than 20 companies. In addition to Amazon, Uber and Starbucks, rewards are also available at airbnb, Nordstrom, Sephora and Target.

“We see ourselves as demand generation first and customer loyalty second,” the rep adds. “By rewarding consumers for discovering great restaurants and dining out, we improve the initial experience and help to create loyal customers.”

Seated’s restaurant partners include Rosa Mexicana, Philippe by Philippe Chow and Blue Ribbon. The company’s largest user acquisition channel is word of mouth, along with ads on digital and out-of-home platforms—including ads in the New York subway system.