What's The Story With 'Star Trek: Picard'? Don't Ask Me 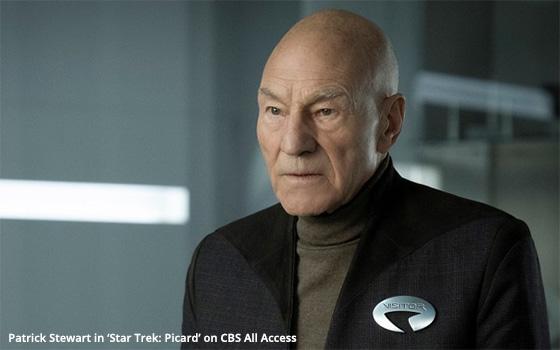 Reviewing any TV show or long-running TV brand presents a challenge when one does not belong to the cult that has grown up around it.

Many times, I have stepped into the minefield of revered TV shows and consequently have borne the brunt of readers' anger over my obvious ignorance.

Not so this time. In reviewing the newest and latest “Star Trek” spinoff “Star Trek: Picard” (premiering Thursday on CBS All Access), I am taking no chances.

I am admitting right up front here that the full story of the life of Starfleet Capt. Jean-Luc Picard is unknown to me. (As a matter of fact, I just had to look up how to spell “Starfleet” -- as one word or two.)

Therefore, I cannot and will not judge the new “Star Trek: Picard” based on any criteria related to continuity. For example, as the show begins, Picard (played as always by Patrick Stewart, now 79) is seen in retirement apparently residing at his own chateau and vineyard in France.

Perhaps this has been widely known to Picard fans for years. I have no idea. They too might already know why he was driven into retirement a number of years previously.

In the first episode of “Star Trek: Picard,” this is explained as resulting from an outbreak of a destructive war in which manmade androids rebelled and wreaked widespread death and destruction among the populations of the galaxy.

Picard may have had a role in making a decision at the time that did nothing to prevent the catastrophe (although he thought it would) and he resigned (or was possibly terminated). Here again, maybe all of this was already known to the Picard faithful.

Forgive me, but I must suffer from an imagination deficit that has long made me incapable of understanding the far-flung and often complicated interstellar story lines of “Star Trek,” “Star Wars” and other series like them.

Suffice it to say that Picard still suffers from the memory of this cataclysmic event and has lately been having disturbing dreams that involve the android named Data who served him faithfully on the old Starship Enterprise in “Star Trek: The Next Generation” (1987-94) and subsequent full-length movies (played by Brent Spiner).

The first episode of “Star Trek: Picard” raises more questions than it answers. In the show, Picard is seen being reeled back into the labyrinth of interplanetary relations and Starfleet politics -- possibly leading to his taking up command again on a Starfleet vessel (although this is far from clear in Episode One).

The catalyst for his possible return is the emergence of a new class of advanced androids, represented by a young woman (Isa Briones) who comes to see him.

In at least two action scenes in the first episode of “Star Trek: Picard,” this mysterious young woman singlehandedly (and single-footedly) takes on groups of armed assailants who greatly outnumber her, and mops the floor with them.

Her prowess for this kind of combat even surprised her, leading her to believe she may not be what she had always assumed she was -- just a normal human.

At least one of the action scenes looks so amateurish that it reminded me of scenes from the old live-action “Teenage Mutant Ninja Turtles” TV show.

But please do not interpret that sentence as a broad criticism of “Star Trek: Picard.” I am sure “Star Trek” fans will eat this up and enjoy every minute of it, just like every other “Star Trek” incarnation that has come down the pike since the 1960s.

Stewart himself makes the whole thing worthwhile. He is a riveting presence. At the risk of incurring the wrath of at least some “Star Trek” fans, it has always seemed to me that compared to William Shatner's portrayal of Capt. Kirk, Stewart's Picard was always the most elevated of the starship captains in the “Star Trek” universe.

May Picard live long and prosper.