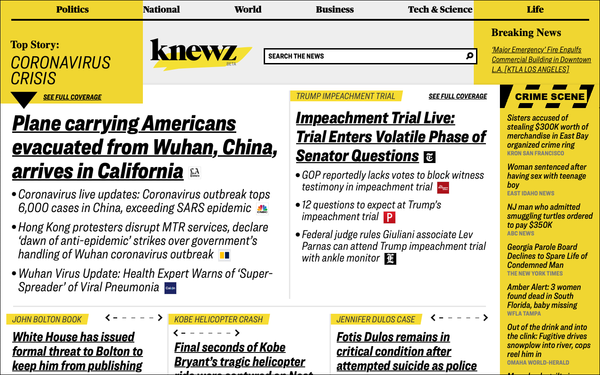 News Corp. has created a new way for readers to source breaking stories through its headline aggregator Knewz.com, which launched today.

Visitors to the site can peruse headlines from more than 400 publishers located in all 50 states, including Axios, BuzzFeed, Deadline, The Federalist, Mother Jones, National Review and Washington Examiner.

The creators expect that number to increase during beta testing.

The site says it uses the widest variety of sources without filter or bias. It utilizes proprietary artificial intelligence capable of scanning hundreds of news sources and editors to curate a selection of headlines to power its feed.

“Knewz is unique in that readers can, at a single glance, see multiple sources. It is not egregious aggregation, but generous aggregation. There are mastheads from across the political and regional spectrum, and premium publishers will not be relegated in the rankings,” stated Robert Thomson, CEO of News Corp.

Publishers may financially benefit from Knewz. News Corp stated it will help publishers to monetize their content by providing them as much data as possible, while maintaining their branding across the site.

Knewz.com is accessible across desktop, mobile and mobile app.