Who Are You? It's Edie Falco Starring In 'Tommy' On CBS 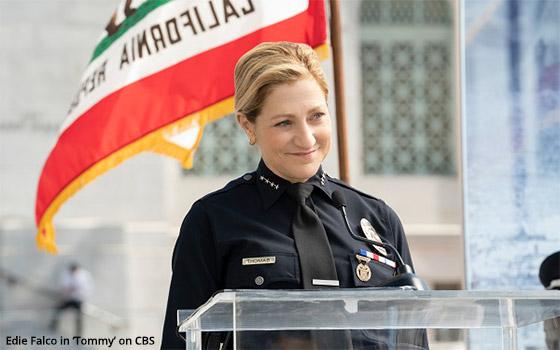 It's not every day that a new show comes along featuring one of the best actors TV has ever had.

As such, “Tommy” commands our attention almost solely because of its star, Edie Falco. She elevates a show that in many respects is like dozens of others we have seen already.

And yet, you watch Falco at work and you just want to cry. And that’s not even because anything all that sad is really going on in her character’s life. In Falco’s hands, she is just so real. Above all else, the emotion she causes to well up in a viewer is awe, not sadness.

Falco is the title character of “Tommy.” She is Abigail Thomas, nicknamed “Tommy,” a veteran, high-ranking member of the New York Police Department who is tapped to be the chief of the LAPD.

In real life as on TV, much is made of the fact that Tommy is the first woman to ever hold the job of chief of the Los Angeles Police Department. Oh, and by the way, she also happens to be a lesbian.

If there is a symbolic reason why the creators of this show felt the need to saddle her with a man's name -- Tommy -- the symbolism is not entirely clear in the premiere episode (which I previewed last week).

Plus, a TV critic of a certain age cannot stop thinking about “Tommy,” the Who rock opera from 1969 about a deaf, dumb and blind kid who became a pinball wizard. This new CBS show would appear to have nothing to do with that.

But I also remembered that various Who songs served as the themes for all four of the “CSI” shows on CBS (such as “Who Are You?” on the original show, “CSI: Crime Scene Investigation”). For what it is worth, or if it is relevant to anyone (other than me), no Who songs were heard in the premiere episode of “Tommy.”

In the show, the name Tommy might serve as a symbol of this woman's entry into a decidedly man's world in which various forces of male evil (the mayor, the male higher-ups in the police department, the former chief played by Corbin Bernsen) are all arrayed against her in the very first episode. And it is her first day on the job.

The show's depiction of big city politics, in which everyone is involved in an elaborate, nasty chess game, is a TV cliché.

And so is the show’s premise in which an outsider is appointed to the top job on some city or town’s police force and comes to the job with the intention of shaking things up. “The Commish” and “The District” come to mind, but there must assuredly have been others.

However, while watching Edie Falco define this character, you forget all about the eye-rolling clichés you have seen a hundred times before. With her in the title role, the clichés take a back seat.

How do you think she does it? I don't know. Great acting is a mystery to me, but I know it when I see it.