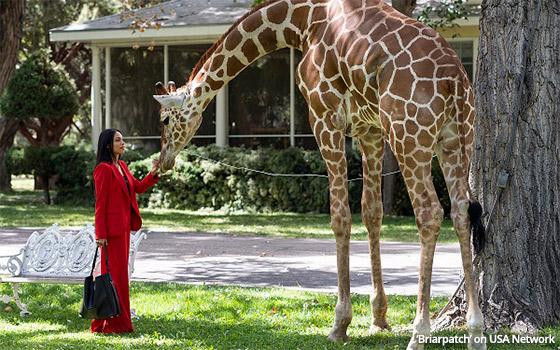 Life can get pretty prickly in a briar patch, which is likely the reason why this new limited series premiering this week on USA Network is named “Briarpatch.”

The word is not the name of the small town at the center of this story, although that would have made a lot of sense. It is more of a description of it.

The town (by all appearances a fictional one) is called San Bonifacio. Supposedly located in south Texas, the locals refer to it as Saint Disgrace.

“Briarpatch,” the title of this show (and a 1984 novel by Ross Thomas from which it has been adapted), should not be confused with “brier patch” (or “brier-patch” in some usages) -- which was the thorny thicket into which Br’er Fox flung Br’er Rabbit in an Uncle Remus story.

Like the proverbial onion, San Bonifacio is a repository of multi-layered secrets and the people who keep them -- which is just about everybody. Into this thorny thicket is flung a woman named Allegra Dill (Rosario Dawson), special investigator for the United States Senate.

She has come to San Bonifacio, the town in which she was born and raised, to investigate the unsolved car-bomb murder of her own sister, a sheriff's deputy.

This would not be a TV show (and a Very Special “Limited” TV show, to boot) if solving this one murder was all there was to it. No siree, Bob. Not by a long shot.

Eventually, and rather quickly, the story encompasses a number of murky subplots ranging from covert weapons deals in Iraq to the Dill character's sex life, both then (as a wild teenager) and now.

Somehow, the fictional senator from Texas is involved, along with an aide who turns up now and then to chastise Ms. Dill for not doing something quickly or effectively enough.

After watching two episodes of the show, I still have no idea what this man is trying to get her to do. I also asked myself: If she is otherwise distracted by the task of investigating the murder or her own sister, and he knows this, then why doesn't he just do the thing he wants her to do?

Oh, I almost forgot: Someone bombed the local zoo, resulting in all of the animals escaping (the giraffe in the photo above, with Rosario Dawson, might be one of them).

Through all of the secret-keeping, exotic animals sometimes seen on the town's streets and in its parks, and at least one other bombing, Dawson strides fiercely, while saying few words. It is very difficult to get a read on her character.

Perhaps she will reveal more as this limited series goes on. And perhaps this show's many loose ends will be tied together neatly by the end of this limited run.

The view from here is that the makers of this show are laying it all on a little thick. At one point, an escaped tiger is seen padding quietly down the corridor of the town's hotel where Det. Dill has taken up residence.

Was the tiger real or some sort of figment of her imagination? The show doesn't make these kinds of things very clear. At times, “Briarpatch” seems to border on the supernatural -- like a border-town version of “The Shining” combined with “Twin Peaks.”

Watching this show did not exactly make me want to watch more of it. Instead, it had me curious about reading the 1984 book instead.