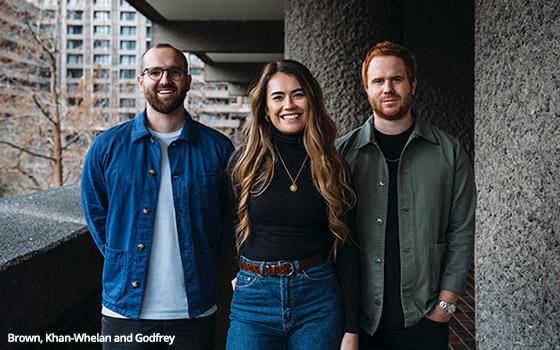 The London-based agency is backed by two European agencies Blurred and Tin Man with Nik Govier (Blurred) and Mandy Sharp (Tin Man) sitting on the Happy Yolk board and providing strategic and business advice.

“Our ideas are engrained in culture and focused on real business outcomes,” says Khan-Whelan. “We take a refreshing approach to briefs that is nimble and focuses acutely on the task at hand.”

The three veterans have long known one another through industry ties. Creative director Godfrey, previously toiled at The & Partnership and Karmarama. Brown, also a CD at the new agency, previously worked at Nike. Khan-Whelan, HY’s head of production, formerly worked as creative producer at The Communications Store.

They will be supported with freelancers and with a new hire to bolster the consumer PR side of things, soon to be announced, according to Khan-Whelan.

In the run-up to launch, the trio have already completed work for telecom firm TalkTalk, free-range egg marketer Happy Egg Co and teamed up with Sony Music and DJ Khalid on the release of Khalid’s latest album.

This agency’s origin story centers around a stunt designed to vie with Kylie Jenner for Instagram popularity. The three came together on a self-initiated project — titled World Record Egg Campaign — to transform a simple egg photograph into the world’s most ‘liked’ posted image toppling Jenner’s record. This initiative then went on to champion mental health via a Super Bowl reveal last year, in partnership with Hulu and Mental Health America. This connection to culture and cause will drive the strategic thinking and creative output of Happy Yolk.

“We were able to get a picture of an egg from a sofa in South London to the Super Bowl within four weeks,” jokes Godfrey. “So we can’t wait to see what we can create with like-minded people and brands that want to stand out.”

The decision to name their agency was obvious, says Khan-Whelan. It serves both as a “reminder of our work on the Egg and where we’ve come from,” but also that at the “core of what we’ll deliver as an agency is positive, effective ideas that bind brands with people, culture and causes.”