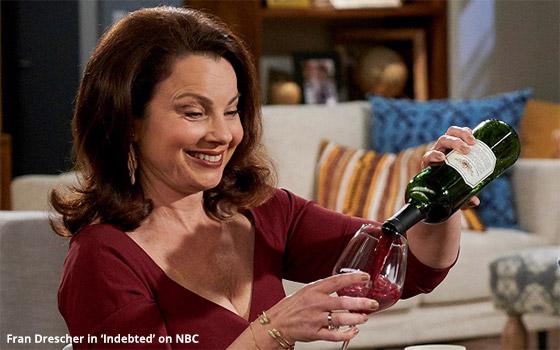 The elevator pitch for “Indebted” must have gone something like this: Idiot Baby Boomer parents with no sense of personal responsibility move in with, and sponge off of, their responsible grown children.

For some reason, possibly while distracted by something else, someone at NBC OK’d this idea and the result is this new sitcom that makes a long-time married couple out of The Nanny (Fran Drescher, pictured above) and one of the stars of “Wings” (Steven Weber).

The attraction to the distracted NBC executive who approved this show may have been its role-reversal concept -- Baby Boomer parents in their 60s moving in with their adult, 30-something kids, instead of the other way around: Baby Boomer parents still caretaking their grown children long into their 30s.

The latter scenario happened to be the premise of another NBC sitcom called “Crowded” a few years back that came and went in the proverbial blink of an eye. Expect “Indebted” to meet the same fate.

You watch a show like “Indebted” with an air of disbelief that they are still making TV shows like this.

Full disclosure: The preceding paragraph was lifted verbatim from the review of “Crowded” I wrote here in March 2016. And here we are, in February 2020, back to square one -- again.

While thinking about this TV Blog, and going back to reread some of the reviews of mostly NBC sitcoms published here over the last few years, it dawned on me that one of the problems with these shows is their emphasis on First World problems.

I have pointed this out before. One such place was a review of another short-lived NBC sitcom called “I Feel Bad,” reviewed here in October 2018. “In ‘I Feel Bad’,” I wrote then, “the narration is among the worst ever heard in a network sitcom. It goes on and on, never ceasing through entire episodes. Moreover, this narration is little more than an endless litany of complaints.

“They are First World problems: The drop-off line at [the main character's] kids’ school is too long, her butt is too big, her co-workers never save her a plain bagel and more. It’s all trivia, delivered in an insipid whine by Sarayu Blue, the star of the show and the mom who ‘feels bad’.”

The whining is similar in “Indebted,” which opens with a scene in which the younger couple, Dave and Rebecca, are shown complaining about -- get this -- that they have too much stuff. Oh, poor babies!

The premise of the show is that Dave’s parents (Rebecca’s in-laws) have gone heavily into debt from a combination of flubbed business opportunities and ill-considered spending on exotic travel.

Now their dilemma is: The two aging Baby Boomers (named Deb and Stu) must sell their long-time home in a well-to-do suburb of New York City in Connecticut, and they have asked son Dave, who is some sort of contractor or designer, to renovate their dated home to prepare it for sale.

Thus, they have to live somewhere during the renovation, so they impose on Dave and Rebecca, and their children, Asher and Hazel (yes, those are their names).

To play Deb, Drescher plays dumb. She calls Twitter “the tweeter” and refers to Airbnb as “Air BLT” -- you know, like all dumb older people do when it comes to tech thingies like the interweb and cellular telephones.

This might come as news to younger people who think older people are dumb as fence posts when it comes to technology and social media, but people in their 60s know all about these things, and they are proficient at using them.

The “joke” that older people are clueless about such things is no longer valid, and has not been valid for quite some time.

The truth is that using computers today, surfing the internet, and signing up for social media accounts is not difficult to do. Maybe people in their 90s might not be so skillful, but that is a whole different ballgame.

Fran Drescher is not Betty White (although I would bet my last dollar that Betty knows her way around “the Twitter” and “the Facebook” like nobody's business).

In the final analysis, “Indebted” exists solely for younger viewers (18-49, one supposes) to make fun of their parents -- the people who are dismissed by younger people with a sarcastic “OK, Boomer” every time they venture an opinion.

That’s not going to work for the TV Blog, and nor will it work on NBC. Look for “Indebted” to go to the same place as “Crowded,” “I Feel Bad,” “Abby's” and a bunch of other NBC sitcoms that have come and gone in recent seasons -- nowhere.