ABC Prison Drama 'For Life' Is As Dreary As Prison Itself 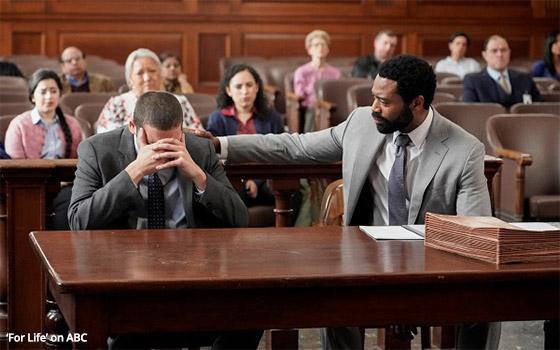 In the role of a convict serving a life sentence who apparently trained himself in prison to become an attorney, Nicholas Pinnock is the best part of “For Life,” a new prison-and-courtroom drama premiering Tuesday night on ABC.

He is the central character in the show -- the character about whom the title was coined. The character, Aaron Wallace, an African American, is serving a life sentence in a New York state prison (in what looks like Sing Sing) on a conviction as a drug kingpin.

He insists he is the innocent victim of an elaborate frame-up involving a justice-system power structure that, in this telling, is 100% white -- including cops, DAs and prison guards.

So not only has he been sent up the river “for life,” he is also fighting “for life” -- i.e., his freedom -- by practicing law behind bars, representing fellow inmates and, in the process, trying to retry his own case.

As you might easily guess from the countless such TV shows and movies with similar subject matter that have come and gone before this one, Mr. Wallace faces many challenges and long odds. But he is a plucky, earnest, courageous fellow who is rendered quite likably by Pinnock.

The problem with “For Life” is the same issue we are seeing time and time again with these kinds of dramatic television series. They all depict a world that is inherently evil, racist, discriminatory, deceitful, unjust, paranoid -- you name a negative characteristic and the world according to television has it.

I have asked this kind of question before and I will ask it again here: Where is the entertainment value in yet another dramatization of our unjust justice system? Or to put it another way (a phrase in danger of being overused in these TV Blogs lately), when did this entertainment medium -- television -- become the saddest place on earth?

Watch a show like “For Life” and all you see are long faces with pained expressions. Everyone is fearful of something or someone. Suffice it to say that no one is having any fun at all, including anyone watching this.

Specifically, in “For Life” and in so many other TV shows of this type, city and state governments from L.A. to New York (and Chicago in-between) are cesspools of cynical public servants whose only purpose in life would appear to be to preserve their own power and to send wrongly accused people to prison (sometimes in service of the former purpose). And that’s about it.

Watching people such as this inmate-attorney (“inspired” by the real-life story of a man named Isaac Wright Jr., according to ABC) struggle against almost impossible odds as the powers-that-be sneer at him and undermine him at every turn is a joyless experience.

It is not even that this premise or its plotlines are altogether terrible. The show is reasonably well-made and, as these kinds of shows go, it does not appear as implausible as most of them do.

At least one exception to this might be in the way Wallace and his estranged wife pass various objects to each other on visiting days, right under the noses of prison guards. These scenes defy belief.

In addition, Wallace possesses an illegal mobile phone in his cell. What is this? A joke? This prison inmate has a “cell” phone?

Clearly, life as a self-made lawyer in a state prison who intends to fight the power structure in New York’s criminal justice system from behind bars is no bed of roses. Watching this man live this life is no bed of roses either. Instead, it is depressing.

Let the record show that just around the time that “For Life” will be premiering Tuesday night on ABC -- 10-11 p.m. Eastern -- the two-night “144th Westminster Kennel Club Dog Show” will be in its own final hour on FS1 (Fox Sports 1) and verging on the triumphant crowning of this year’s “Best in Show” top dog.

Which of these two shows would you rather watch?

television
1 comment about "ABC Prison Drama 'For Life' Is As Dreary As Prison Itself".
Check to receive email when comments are posted.
Next story loading