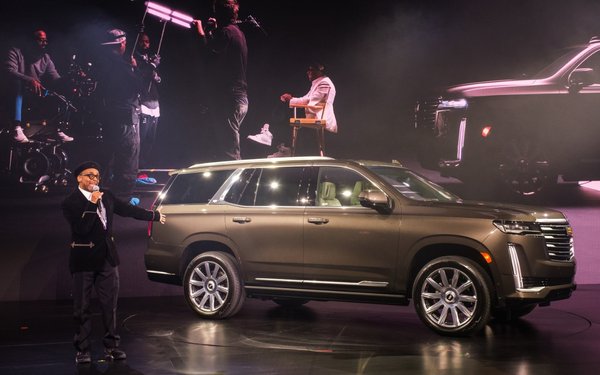 Cadillac is using this Sunday’s Oscars as the platform for a new brand campaign for the seventh consecutive year.

Themed “Make Your Way,” the effort for the General Motors luxury division includes one spot from Leo Burnett Detroit in collaboration with Carat and two spots solely from AOR Leo Burnett Detroit. The agency was previously called Rokkan but has dropped that moniker, per Cadillac.

“It’s about people who have this sense of drive and purpose in life, and push through obstacles and do great things,” Cadillac CMO Melissa Grady tells Marketing Daily. “Nobody just hands you a Cadillac. It’s something you work hard for and when you finally obtain it, it’s a big deal.”

The theme fits nicely into what the award show is all about: recognizing people who differentiate themselves and achieve creative greatness.

Oscar-winning actress Regina King will help introduce the campaign and 2021 Escalade in one spot, while two additional spots, “No Barriers” and “Finish Line,” will highlight Cadillac’s new vehicle line-up, while celebrating the grit of those who make their own way to success.

“No Barriers” includes the voiceover “Cadillac. For those who make a way, find a way, and challenge the rest, to get out of the way. Others talk about the road to success, we make cars for it.”

The luxury automaker has used the Oscars for several years for multi-pronged marketing activations that have had good results in reaching its affluent and creative target audience. Cadillac saw a 47% jump in dealership website traffic last year when the brand debuted four TV spots with the theme “Rise,” featuring the Cadillac SUV lineup.

An in-broadcast pre-show integration included a marquee interview stage with a campaign tie-in. The spot themed "Keep Rising" led to a 50% lift in search queries for the General Motors-owned automaker compared to the same period in 2018, as well as a 65% spike in main website traffic, per the automaker.

Cadillac was already in Hollywood Tuesday to debut “Anthem,” a two-minute-and-14-second video by Spike Lee that was used in the debut of the redesigned 2021 Cadillac Escalade. The spot has been posted to Cadillac’s social media sites.

“With this reveal, we wanted to do something special and innovative that highlighted the Escalade while telling the bold story of all of the new features,” Alexis Kerr, head of multicultural marketing at Cadillac, tells Marketing Daily. “The ‘Anthem’ is the first of several short films that will highlight major vehicle features.  The next short film will focus on a key feature and Spike Lee will mentor that director in bringing that short film to life.”

Both ”Anthem” and the Oscars spots feature music from the song “Nobody Speak“ by DJ Shadow featuring Run The Jewels.

GM already has a relationship with Lee since his ad agency, Spike DDB, began working with Chevrolet in 2010 and Cadillac in 2013.

“We’ve been working with Spike for years and we all have the same vision,” Grady says. “When we came up with our themes --‘See and be seen, hear and be heard, and move and be moved' -- Spike knew how to express those. He’s such an icon, and Escalade is such an icon.”