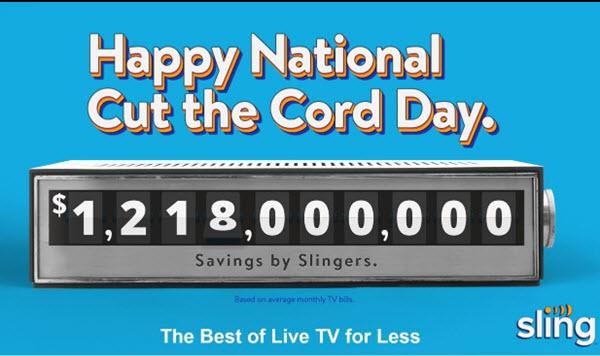 As an added hook for fifth-anniversary promotional offers, Sling TV has had the National Day Calendar declare February 9 “National Cut the Cord Day.”

Between February 7 and 11, the virtual MVPD streaming service is offering several special offers for new or returning customers.

During the promotion, Sling TV is also offering new customers a  “Cord Cutter Bundle” that includes an OTA antenna and Sling’s AirTV 2 and AirTV Mini devices to enable free local-channels access for $5 — a package that’s normally priced at $99.

Sling has also set up a Cord Cutter Hotline (1-855-553-2862) to give potential cord-cutters who are concerned about the process the support they need to take the leap.

"National Cut the Cord Day is designed to take away any excuse to cling to cable” by demonstrating “how easy it is to cut the cord and get started on Sling TV," summed up Sling TV Group President Warren Schlichting.