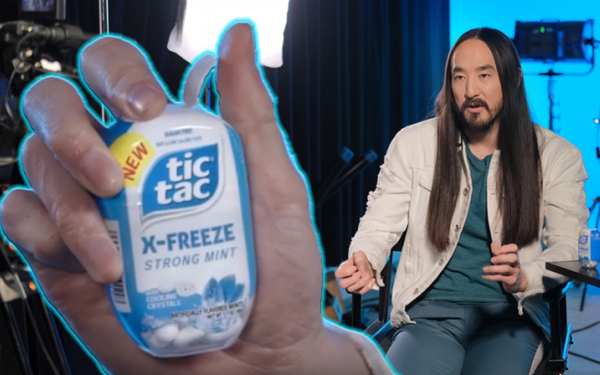 Ferrero USA sees alignment with entertainment personalities as a sweet spot for both a new Tic Tac line extension and a for its three-month-old Kinder Bueno chocolate bar.

Two-time Grammy-nominated DJ/producer Steve Aoki directs and stars in Tic Tac’s launch campaign for X-Freeze, which is 50% larger than the brand’s standard size and whose strong taste is exemplified by Aoki’s penchant for sky diving and other adventures.

Two 15-second spots and a longer, behind-the-scenes video show Aoki snowboarding, jumping off a roof into a swimming pool and immersing himself in a pool of ice—when he’s not performing for screaming, live audiences around the world.

The campaign for Tic Tac, which was Ferrero’s entry product in the U.S. market in 1969, is digital-only and runs on the brand’s social platforms, along with paid social and YouTube placements. They were directed by Aoki and produced/edited by New York-based agency Laundry Service.

In a 30-second spot titled “Life Gets Bueno,” a female shopper samples a Kinder Bueno—containing wafer, hazelnut and chocolate—before floating upward in slow motion as the voiceover says, “It’s not your average chocolate bar.”

It was the second time in three years that Ferrero tapped the Oscars to debut a new Kinder product, the previous being Kinder Joy in 2018 following its 2017 launch.

“Our goal was to tap into the excitement, sophistication and fun of the night to reach U.S. consumers during this important tune-in moment,” Noah Szporn, vice president of marketing for Kinder North America, tells Marketing Daily.

Beyond the awards, Kinder Bueno collaborated with Meredith Corp.’s People to develop and produce “Life Gets Bueno Unwrapped.” It’s a custom vignette featuring Julian Day, the costume designer for the films “Bohemian Rhapsody” and “Rocketman.”