Netflix Cozies Up To Samsung With Bonus Content For Galaxy Users 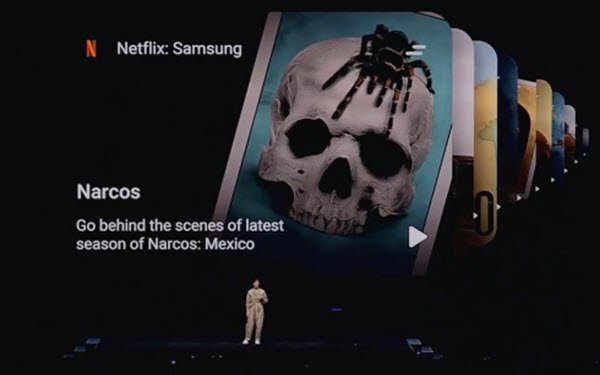 Netflix has struck a deal with Samsung that will make bonus content from some Netflix shows available on Galaxy smartphones.

The two companies have collaborated on marketing campaigns for a decade, but this marks a deeper commitment reflecting Netflix’s need to boost its global distribution for better competitive positioning in the streaming wars.

While Samsung has struck similar integration deals with other content providers, such as Spotify, Netflix’s agreement to provide Galaxy users with bonus content is unusual, according to Techcrunch.

However, the deal isn’t a true “exclusive.” Netflix will also retain rights to publish the bonus content, and it will be accessible to all through publication on Samsung Daily, Samsung.com, and Samsung’s social channels.

The bonus content will include “behind-the-scenes footage, companion stories and other bonus content — much of it filmed by the Samsung Galaxy S20’s new camera,” notes TechCrunch.

The initial bonus content will come from “Narcos: Mexico,” “Sintonia,” “Elite” and “Netflix is a Joke,” among other shows, with more offerings to come later.

“The mission of this partnership [is] to make the Netflix viewing experience on Samsung mobile the absolute best it can be,” Netflix CMO Jackie Lee-Joe said during the deal announcement at Samsung’s Unpacked event (above) this week.

As Techcrunch points out, that means that Netflix’s “only viable option to get similar global scale is Samsung,” which had an 18.8% worldwide market share (of shipments) in Q4 2019, versus Apple’s 20%.