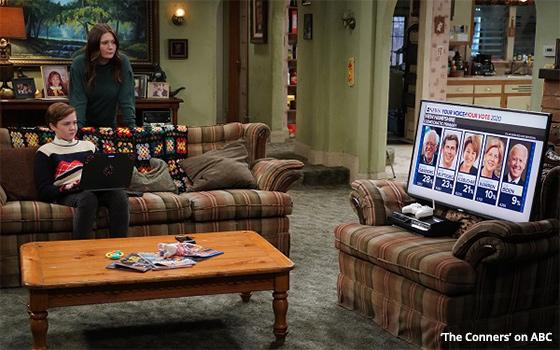 In a clever and perhaps unprecedented tie-in to real-life current events as they were unfolding, “The Conners” went live on ABC last Tuesday night as the outcome of the New Hampshire Democratic primary was being reported during the evening.

As a result, the fictional characters in this prime-time sitcom were seen reacting to aspects of this real-world news -- including Bernie Sanders being declared the winner, and the fates and fortunes of some of the other Democratic candidates on the Granite State ballot that day.

Naturally, in this household in the fictional Illinois town of Lanford, the source of the evening's New Hampshire primary results was ABC News.

It is a small detail to quibble about, but the Conners' TV for the evening was a flat screen propped on an upholstered chair (as shown in the photo above). That would seem to be an odd place to mount a flat-screen TV, but as my mother used to say: To each his own.

Perhaps the TV was placed there as a way of including a TV in the shots of the show's living room, which until Tuesday night’s episode might not have contained a TV set at all.

It was a regular episode of “The Conners” that just happened to include the night’s election news. The portions of the show dealing with the primary had to do with young Mark (Ames McNamara, pictured above with Emma Kenney), son of Darlene (Sarah Gilbert), watching the election returns as part of a homework assignment for school.

During the episode, various family members were seen drifting in and out of the living room and adjacent kitchen commenting on the fly about the political news.

At one point, Mark issued an update. “They're saying Bernie won it,” he said, “but there could be some Russian hacking. Putin's in second!”

In fact, that line may have been one that was added for the West Coast feed (which was the version of the show the TV Blog watched on ABC.com last week).

None of the show felt like it was ad-libbed in any way in order to respond to the election news. Instead, it seemed likely that some additional pieces of dialogue -- such as the Putin line -- were created during, or perhaps just before, airtime in order to have the characters reacting to the news in “real” time (or close to it).

It should be noted that the show did not rely entirely on the election results as its one and only storyline.

Just as prominent was a subplot concerning Dan (John Goodman) and the girlfriend he has been seeing this season, Louise (Katey Sagal). During the show, the two broke up and she announced she would be leaving town for a few months.