Fazoli's Amps Up Its Mobile App Game Step By Step 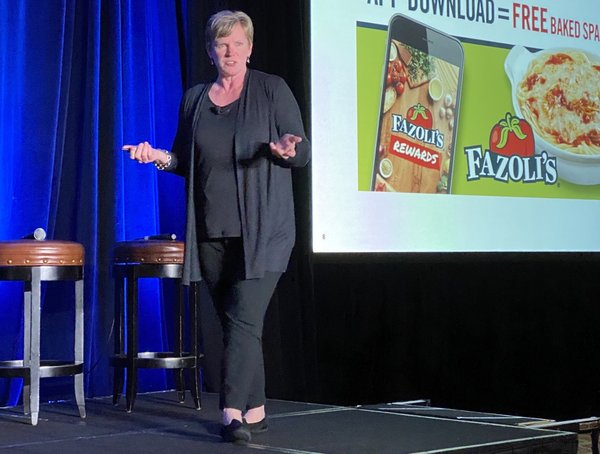 When Fazoli's marketing team saw that its restaurant in Nicholasville, Kentucky (population 28,000), was a hotbed of mobile app participation, it had to know why. Turns out the general manager there knew her regular guests and would talk to them about the benefits of using the brand's mobile app. "She'd say, 'Just give me your phone, I'll do it for ya,'" said Jodie Conrad, CMO at Fazoli's.

Conrad spoke Tuesday at MediaPost's Brand Insider QSR Summit about the company's mobile app and loyalty journey. Fazoli's is a premium QSR with an Italian concept founded in Lexington, Kentucky, 32 years ago.

The foundation of the journey was about getting buy-in for the app. One way to get buy-in from franchisees, she noted, is to have the company boss mandate it. "The key is to find supporters among your franchisees because franchisees listen to other franchisees more than they listen to [management]," Conrad said.

After hiring a partner, Punchh, they realized they had to have someone internally dedicated to the job and now their digital marketing manager spends 90% of his time on this.

Once they launched, the business of building awareness inside and outside began.

"A small thing but it helped us a lot was creating a instructional video on how the app worked," she said. She also had success with ads on Google and Facebook.

Then she set about engaging users with offers by building awareness and trial for the brand's limited-time offers and integrating it with silly national days like National Meatball Day.

A year ago, they began segmenting by recency and frequency and came up with four groups. After managing discounts and sending higher offers to new customers and those with higher regencies, they were able then to further segment the groups into six, dividing the top and bottom groups in two as they responded to offers.

Offers were also based on other behaviors like "after church, which is a big thing for us. We're targeting those users." And kids meals/families. "All kids like pasta, right?"

Finally, Fazoli's recognizes its most loyal users by sending thank-you notes and offering them a pair of branded socks.