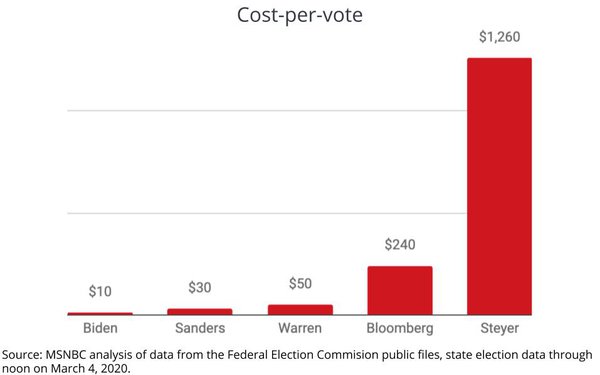 MSNBC's "The Beat With Aria Melber" conducted a fascinating ROI analysis of the Democratic campaign spending to date, and it shows that when it comes to media spending, Joe Biden is the ROI candidate.

At $10 per vote yielded through noon on March 4, Biden has had the most cost effective campaign to date, beating his next closest rival, Bernie Sanders, by a margin of three-to-one.

The disparity gets even more startling as you work your way across the spectrum of candidates to the billionaire boys club with Mike Bloomberg paying a whopping $240 and Tom Steyer $1,260 per vote.

Of course the calculation doesn't factor in the value or impact of "earned media," and cash-strapped Biden's campaign didn't have much choice in paid media spending levels, but the value of the torrent of public endorsements he got in the days and hours leading up to Super Tuesday, clearly gave him some organic juice.