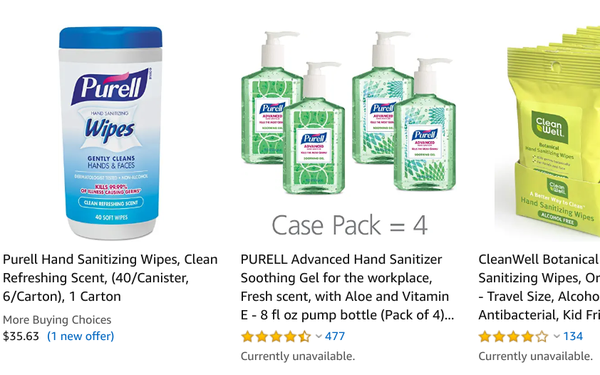 The Justice Department says today it means to hold gougers profiting from the coronavirus outbreak accountable under antitrust laws.

It said its announcement “is part of a broader administration effort” to ensure “the strongest possible position to respond to the outbreak.”

The DOJ announcement comes the same day the Consumer Brands Association (CBA) urged Attorney General William Barr to get the Justice Department involved in thwarting price gouging of products that are thought to be useful against the Covid-19 virus.

The CBA also reported its own research that says 24% of consumers have noticed price gouging on products that are in high demand during the coronavirus outbreak, and 88% have tried to report it to government agencies.

In the letter sent by the CBA's Bryan Zumwalt, the executive vice president, public affairs, wrote,  “Absent federal engagement, [CBA]  fears that price gouging for consumer products — which has been on the rise in recent weeks — could have the severe adverse impact of preventing consumers from obtaining the preventative consumer products they need to protect themselves from the spread of COVID-19.”

But in reality, states have the most  jurisdiction over most gouging problems. The association’s blog listed agencies in 34 states with anti-gouging laws where consumers can report incidents.

“Hand sanitizer shouldn’t cost $149 and the market rate for Clorox wipes isn’t $44.25,” the CBA’s blog says. “The opportunists charging these ransoms are primarily third-party sellers. Retailers like Amazon and Walmart that host products from third-party sellers are working to combat price gouging.  Amazon said it had removed 530,000 products and 2,500 sellers from its platform as of March 6 for charging inflated prices.”

But as empty shelves attest, it is the ultimate seller’s market for those products at the moment.

Almost a month ago the Federal Trade Commission warned consumers that scammers see events like this as an opportunity to take advantage of consumer fears and lack of information.  In recent days, the attorneys general in West Virginia, California and Washington have also warned about state laws prohibiting gouging and urging citizens to report offenders.

The CBA, called the Grocery Manufacturers Association until earlier this year, represents brands from household care products to food and beverages. It underscores that in most cases, manufacturers aren’t the ones attempting to jack up prices.

But in a down stock market, a few brands are riding a wave of their own because their products are now in high demand. Clorox stock is trading for around $174 per share today, up about $25 per share since the beginning of the year, and has hit 52-week highs for many of the last several days.