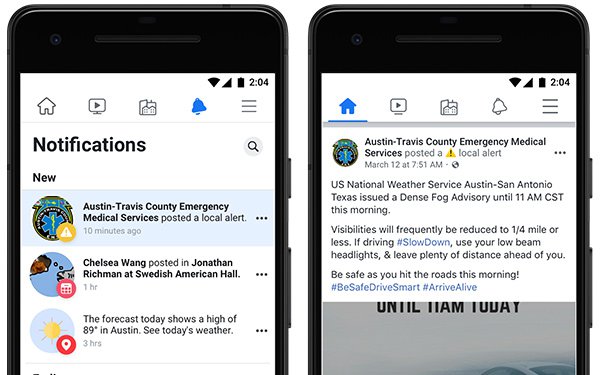 “We’ll also provide additional training to partners as they start using local alerts to share best practices for using the tool most effectively,” a company spokeswoman said on Thursday.

Since early 2018, Facebook has been working with local authorities to help them communicate urgent, need-to-know information when it directly affects people in their communities, or requires specific actions.

When authorities mark posts as local alerts, Facebook greatly amplifies their reach so users living in affected regions are far more likely to see them.

In addition to prominent placement in users’ News Feed, that includes sending notifications to those living in affected areas, as well as displaying the information in “Today In” -- a new section dedicated to local news, community information and neighbor talk.

In the past year alone, more than 350 local governments nationwide have used local alerts to address everything from flash floods to missing persons to active shooters.

Facebook has also invested in improving the effectiveness of local alert byletting partners specify whether they’re sending a missing person alert, a public safety alert or a weather alert, for example.

The company has also endeavored to make the alerts more targeted by giving partners the ability to select the affected counties, cities, towns or neighborhoods that should receive notifications.

So far, the alerts seem to be working. In fact, 73% of Facebook users who received local alerts reported the posts provided new information they hadn’t yet seen elsewhere, according to internal research.

Additionally, 43% of respondent reported they took an action as a result of the information they received via a local alert, according Facebook’s own findings.
facebook, social media
Next story loading