President No Longer Favored To Win Reelection, Biden Now Tied At Even Money 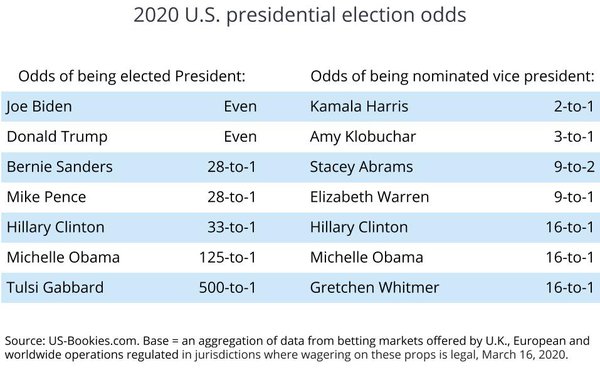 For the first time in the past 12 months, the incumbent is not the clear favorite to win the 2020 U.S. Presidential election. Based on an aggregation of data from betting markets worldwide where wagering on these outcomes is legal, he is tied with Democratic primary contender Joe Biden at even odds for both candidates.

The data, which was released today by betting aggregator US-Bookies.com, shows the Presidents odds of being reelected has narrowed from 4-to-7 the last time it published its aggregation on March 1.

Biden's odds, conversely, moved to even from 11-to-2, while his challenger Bernie Sanders has extended to 28-to-1 from 3-to-1 on March 1.

“Along with tying with Trump as the presidential favorite, Biden declared during Sunday’s debate that his running mate will be female, and the bookies say Kamala Harris is most likely to take this role,” says US-Bookies betting industry analyst Alex Donohue. “Harris is the 2-to-1 favorite to be the Democratic Vice Presidential Nominee, followed by Amy Klobuchar at 3-to-1 and Stacey Abrams at 9-to-2. In fact, the top eight candidates with the best Democratic VP odds are women.”