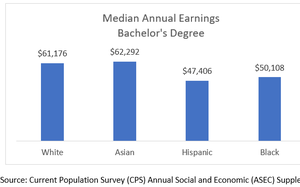 Education is often touted as the great equalizer that enables minorities from lower-income backgrounds to compete for a piece of the American Dream. Data from the Bureau of Labor Statistics, however, tell a very different story. Even after completing four-year undergraduate and graduate degrees, Hispanics and African Americans earn less than non-Hispanic Whites with the same and often less education.

Disparity Despite Similarities in Post-Secondary Education

The numbers are sobering. I ran the Census Current Population Survey’s 2018 median income levels by race and bachelor’s degree attainment, and found that Black and Hispanic bachelor’s degree holders earn nearly a quarter less than Asians and Whites with equal levels of education.

America prides itself as being the land of opportunity where everyone has a fair shot at success. That’s what makes this wage gap so disheartening and a national embarrassment on the global stage.

But acknowledging that a problem exists is the first step toward solving it. To do that, we must have an honest conversation about perceptions in America. Whites think that the wealth held by Black households equals about 80% of Whites. Data from the U.S. Census Bureau, however, reveals that Black wealth is only about 7% than that of Whites.

It’s unlikely that wage and wealth disparity will disappear on its own. In fact, at every level of wage distribution, the gap between Black and White wages was larger in 2018 than it was in 2000.  That is discouraging, but the problem can be addressed. Options to start narrowing the racial wage gap include:

Additionally, economic outcomes are heavily influenced by social networks. People, regardless of race, are more likely to extend opportunities to people of similar social standing as themselves. Creating better opportunities for minority graduates to mingle with or be mentored or sponsored by decision-makers from other groups will help them build social capital to use when seeking well-paid employment.

The U.S. economy is consumer-driven. Closing the racial wage gap will benefit all Americans by ensuring that the next generation of workers, who will be majority-minority, earn enough to contribute equally to our economic growth, thus maintaining our nation’s leadership role in the global economy.